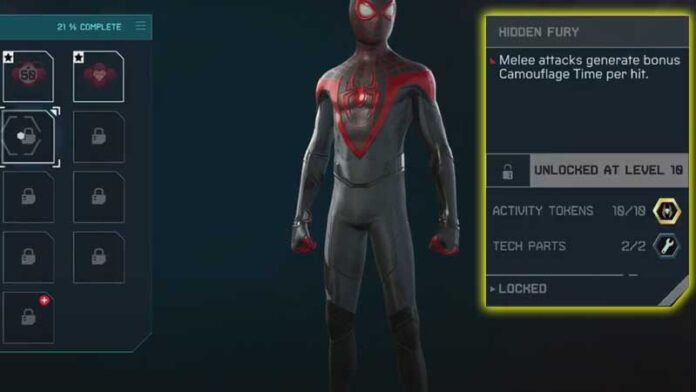 Tech Parts are one of the two in-game currencies of Spider-Man Miles Morales, the other one being Activity Tokens. Compared to Tech Parts, you’ll receive Activity Tokens more frequently. Keeping in mind their rarity, hoarding Tech Parts might prove to be very useful when you need to unlock higher tier items to defeat higher tier enemies later in the game. That’ll only facilitate your gameplay and help you in your endeavors.

Piling up Tech Parts can be done in a number of ways. The most simple and straightforward one is getting high scores during combat. At the end of every mission, you’ll be rewarded with both Tech Parts and Activity Tokens, depending on your score. However, you can’t only rely on this method to supply you with an ample amount of Tech Parts. You’ll have to take some time off the main story missions and do some side-quests.

You can use the “Friendly Neighborhood” app in the game to pinpoint crime locations around the town. These crimes that need solving usually involve combat and stealth which eventually awards Tech Parts at the end of the mission.

Also, keep it in mind that all of these side-activities will not appear right away when you start playing the game but will be revealed gradually according to your game progression. After spending some time on the story missions, these side-quests will start popping up everywhere on your NY city map and you can then explore and hunt yourself some Tech Parts.

And that’s all you need to know on how to get more tech points in Spider-Man Miles Morales. If you need more help, check out Venom skills, combat skills, and camouflage skills guides.