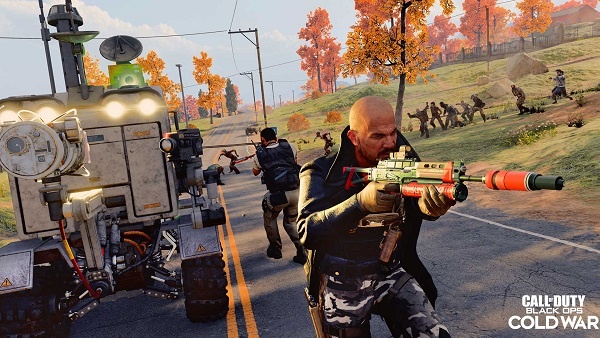 One of the objectives in the new Outbreak Mode of Cold War is to escort the rover as it collects Dark Aether scattered across the map. Players need to follow the rover wherever it goes and defend it from an onslaught from the zombies. The objective, however, is easier said than done. In this guide, we’ve detailed everything there’s to know about completing the objective that requires players to escort the rover in the new Outbreak Mode in Call of Duty: Black Ops Cold War.

Escort Rover in the Outbreak Mode

After players get the objective to escort the rover, they’ll need to rush toward the nearby storage truck – it should be marked on the map. Once there, players need to clear out the entire area before interacting with the truck. Once the area has been cleared up, players need to head over to the panel and activate it. By doing so, the rover inside the storage truck will appear on the ground.

After appearing on the ground, the rover will continue to roam around the entirety of the map in search of Dark Aether. The rover will continually stop at different areas to collect the Dark Aether while zombies try to attack it. It’s important to note that the rover can only tank a couple of swipes from the zombies before going down – it results in the objective being failed. Therefore, players must try to keep the zombies from storming the rover and destroy it.

After stopping at a few Dark Aether stations, the rover will continue toward a large deposit and begin to collect it. Once again, the players’ job here is to let the rover do its job in peace and defend it from any unwanted attention. Once the rover is done, it’ll drive into a portal and disappear to complete the objective. At this point, the players will be asked to place a beacon to either exfil or move to another map.