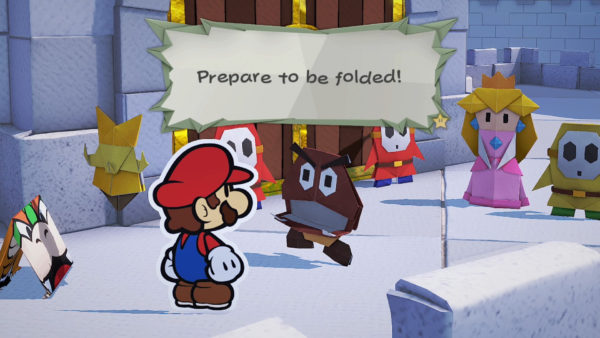 After Mario falls down the pit he will meet some familiar faces. After a brief conversation, Bowsers’ minions will be taken away by the guards but not Mario. Move to the right side of the dungeon where you will find a wooden hammer behind a handful of wooden boxes. After you obtain the hammer go to the opposite side of the dungeon where a shadow (magic circle) is right next to the door. Stand in the magic circle and press X to get the 1000 Fold Arms. You can press R to reset the arms, the tutorial on the screen explains everything so simply follow the instructions. 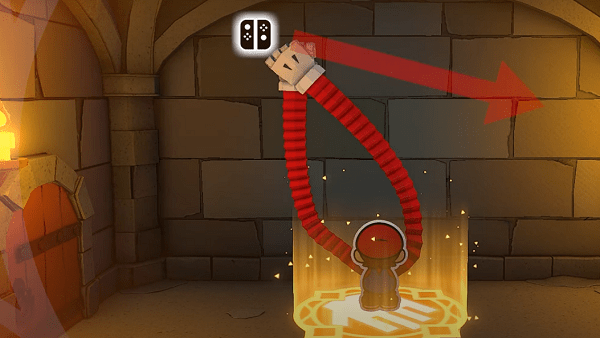 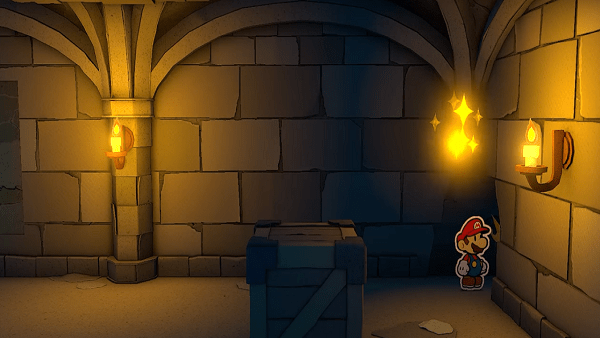 On the wall in front of Mario, there is a tear that can be pulled down to free Olivia from the in-between dimensions. Use Mario’s giant arms to reach the tear and rip it open by pressing the buttons promoted on the screen and dragging the controls to the right. Olivia will tell you about the hole in the wall behind one of the wooden boxes. Use the hammer to break the wooden box and expose the hole in the back wall. 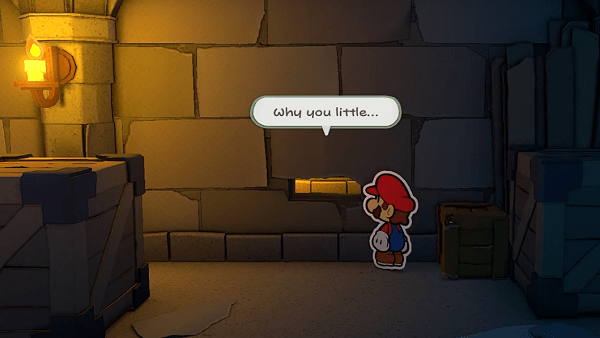 When you get to the other side, turn right close to the end of the pathway you will see an opening in the wall. You can look through the opening to see what’s going on the other side. The door to this door will now be unlocked so you can go and free King Bowser. Press A to pull him down.

Behind the rope where Bowser was hanging there is a set of wooden boxes. Use the hammer to break open the wooden boxes and reveal another magic circle underneath one of them. Use the magic circle to extend Mario’s hands and locate the tear in the wall (left end Piller) and drag it to the right. This will reveal a hidden doorway. Take the stairs upward and you’ll come across the very first save point in Paper Mario: The Origami King. It is a good idea to save the game at this point. Keep going up the stairs to reach the very top of the castle.

At the top of the Castle, Princess Peach will emerge from the giant golden door. Welcome to your very first combat section of Paper Mario. This is a turn-based combat system, never before used in a Mario game. The goal here should be to line them up in a way that allows you to hit as many of the enemies as possible at once. You can use the stick to move whichever circle you want. 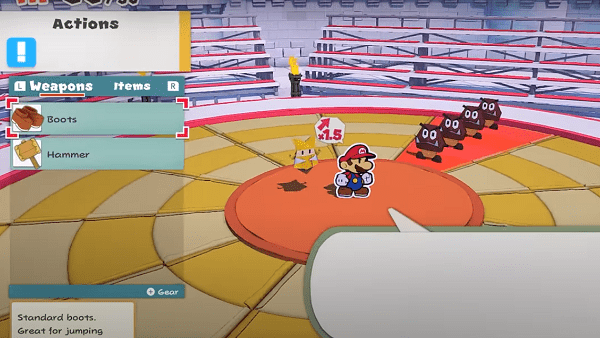 In this case, move the third ring to line up all four of Goombas. Once lined up you can use the boots to jump kill all of them. The section will be a wave battle where you can use your hammer for a wide range attack and take down all four of the enemies at once. After the battle, a brief cut-scene will trigger and you’ll escape the Princess Peach’s castle in Paper Mario: The Origami King.