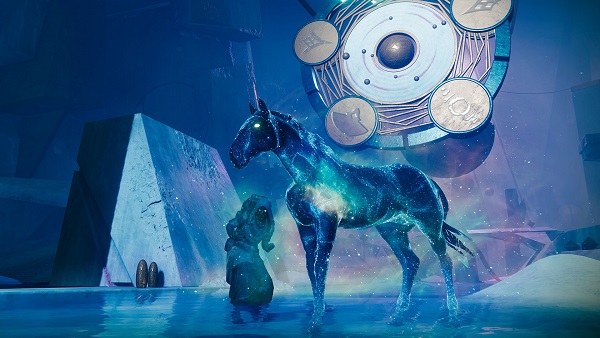 Xur Bounties
Xur’s bounties are important because they offer you the XP needed to finish this season’s Battle Pass journey. To save time, go directly to Xur’s Treasure Hoard and collect the available bounties. You can get them before or during Dares of Eternity.

Starhorse Bounties
The Red Border is a sought-after item that may be used to make weapons, though they are needed since you won’t be able to finish the crafting without them. Each crafting weapon will cost you 5x Red Border. Because the Red Borders are uncommon items, finding them is not simple. In brief, you must be extremely cautious when dealing with the Starhorse and utilize them intelligently to acquire as much weaponry as you want.

Keep in mind that only a limited number of Starhorse bounties are available. Strange Coin will be needed for each bounty, but it’s worth it since you’ll get Strange Coins and Paraversal Hauls as a reward. Things don’t stop here. After completing five out of six bounties, things change every week. You can complete one bounty to finish all six runs, plus returning to Treasure Hoard after each completion is required.

Many people are confused about why they need to purchase Paraversal Hauls rather than earning them by finding treasure keys. The answer is that the loot boxes save you money and earn you Strange Coins in return.

Completion of the Dares of Eternity Runs
The completion of Dares of Eternity Runs is another thing that assures you have a red border weapon, but the difficulty level must be legendary after the weekly reset. Remember that the difficulty level is legendary, so don’t expect anything less than impossible for the other rewards. Conversely, the boss remains unchanged every week, so you may get ready in advance.

Spending Strange Coins and Utilizing Treasure Keys
Be conservative with your strange coins and Treasure Keys, as the inventory has limited slots. If you see that it’s full, start putting the resources in the Postmaster and go to buy Paraversal Hauls from Treasure Hoard. You have a higher chance of finding Red Border weapons inside chests this way.

Weapon Crafting
Your next step after collecting the red border weapons is to start crafting. Again, time is essential, so head to Enclave and craft your favorites to increase their level.

This is how you can farm Dares of Eternity in Destiny 2. To learn more, check out our guide on how you can get the Hero’s Burden SMG.