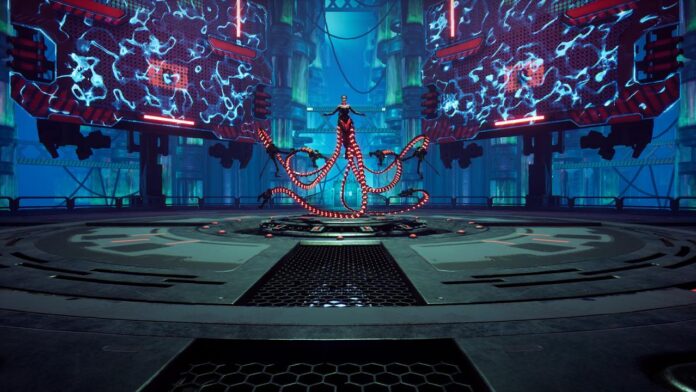 By the looks of her, Mara can be pretty intimidating and you’d think there’s no way in hell I’m defeating that thing. However, getting the better of her is pretty easy and straightforward if you know the right moves. In this guide, we’ll explain how you can defeat Mara in Ghostrunner.

How to Beat Mara in Ghostrunner

Defeating Mara is all about being calm and observant. When the boss fight starts, all of your abilities are disabled except the dash so you’ll have to make the best use of it. Since now, you can’t attack your opponent directly, learning your opponent’s attacks and evading them successfully is the first thing you need to understand.

Mara has a total of 4 attacks for you to deflect. The first one is a slide attack in which she sweeps her tentacle around the platform. You can evade it by simply jumping. Then there are the slam and grab attacks.

As the name suggests, in slam attack she tries to slam you with her tentacle and in grab attack, her tentacle comes at you like a bullet, with intention of piercing your body and grabbing it to suck the life out of it.

You can evade both of these attacks by being observant and moving sideways using the dash ability. The final one is an Area of Effect attack in which she electrifies an area of the platform or the whole platform.

Now, coming towards the main objective of this guide, how to defeat her? Remember the first thing I said, about being calm and observant; this is where that comes into play. While on the platform, you’ll notice some electricity boxes, the trick is to make Mara’s tentacle strike the electricity box when she uses the grab attack.

Doing so will trap her tentacle and you can then easily slash it and drain her health. You can do it by standing right in front of an electricity box and as soon as she attacks, dodging it by timing your sideways dash right.

Landing one blow drains 1/3rd of her health meaning you’ll need to trap and slash her 3 times. With each blow the intensity of attacks increases, for example, when she’s at full health she doesn’t use any AOE attacks when you slash her the first time she starts to electrify a portion of the platform, and with the second blow, she starts to electrify the whole platform.

Another important thing to keep in mind is that she uses sets of different attacks. When she starts using the grab/piercing attacks, that’s your go-sign to stand in front of the electricity boxes.

This is all we’ve got in how to defeat Mara in Ghostrunner. For more help on the game, you can check out our detailed Ghostrunner wiki guides.