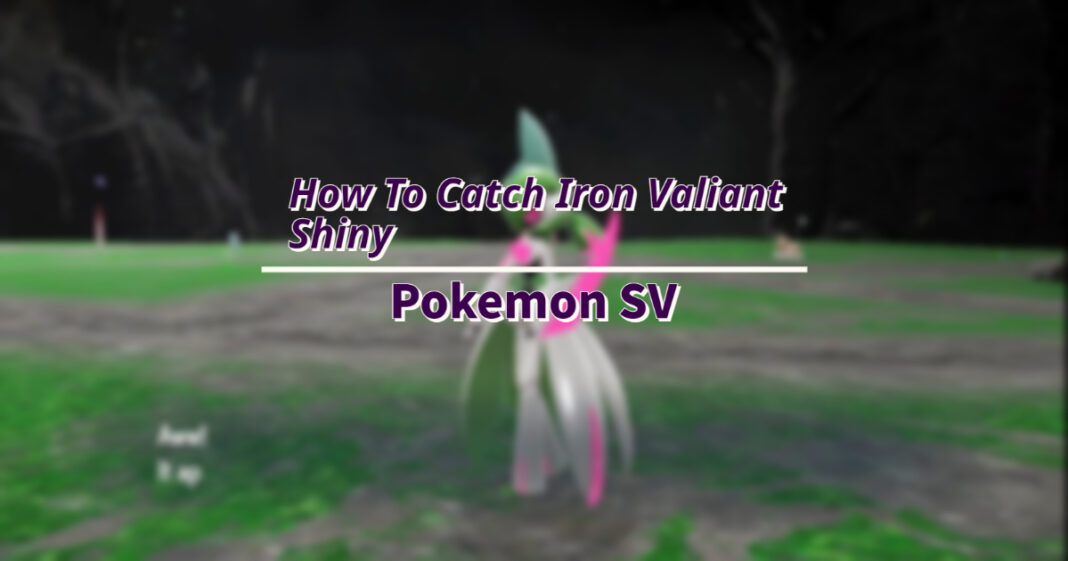 Introducing Iron Valiant, the revolutionary Paradox Pokemon of Pokedex in Scarlet And Violet! This futuristic fusion of Gardevoir and Gallade presents a unique fairy/fighting type combination. Unlock its lustrous power today to take your game experience to new heights. Don’t let the Iron Valiant’s resemblance deceive you; this Pokemon cannot evolve, but it’s still one of the best. In this guide, I’ll tell you how to catch the Iron Valiant and its Shiny variants In Pokemon Scarlet And Violet

Where To Find and Catch Iron Valiant (Location)

If you’re looking for the Iron Valiant, your journey starts at Hidden Cave, between Research Stations 2 and Research Stations 3. Unfortunately, if you have Pokemon Scarlet instead of Violet, this powerful Pokemon can’t be obtained in that version. But don’t worry! You could still obtain it by trading it with a friend who owns Pokemon Violet.

After you’ve identified the research station building, make your way inside and locate the green-colored pedestal. Stand over it to activate a teleporter that will present multiple options for teleportation – select ‘Research Station 3’ from them.

After being teleported to Research Station 3, exit the building, and you will come upon a gigantic cave. Explore the expanse of this cavernous space; if you follow its winding path, eventually, you’ll encounter an immense tree surrounded by boulders.

Venture deeper, and you will find a cave behind the rocks. Once inside, take a stroll down its path to discover the magnificent Iron Valiant’s spawning grounds: an awe-inspiring waterfall cascading from above.

How To Catch Iron Valiant

Once you have spotted the Iron Valiant, it is up to you to decide which type of Poké Ball best suits your needs: Quick or Ultra. Remember that this particular Pokémon species has a disadvantage against Poison, Flying, Psychic, Steel, and Fairy-type Pokemon. By selecting any of the noted Pokemon types, you can easily defeat Iron Valiant and capture it. You only need to concentrate on decreasing its HP, and you will be halfway close to winning!

Iron Valian Shiny is an in-demand variant found at the same location. However, the shiny variant is rare and may not spawn very often. Iron Valiant Shiny is a fighting fairy-type Pokemon, making it a fusion of Gardevoir and Gallade. While it is a rare Pokemon, there are things you can do to increase your chance of getting Iron Valiant Shiny. Sandwiches are a big part of increasing encounter rates and catch rates. The best sandwich in this scenario would be the Great Ham Sandwich; it is the most effective when it comes to spawning Iron Valian Shiny.

To make a Great Ham Sandwich, you need the following ingredients:

You will also need the recipe from the Sandwich Shop in Pokemon Scarlet and Violet. Great Ham is the best Sandwich to catch Iron Valiant Fighting Shiny because of its “Fighting” Encounter Power. Iron Valiant is the only Fighting-type Pokemon that spawns in that cave which means using the Great Ham Sandwich will significantly boost your chances of catching Iron Valian Fighting Shiny.

If you’re looking for Iron Valiant Fairy Shiny, you need to use a different Sandwich but at the same location. The cave in area zero plays host to Fighting and Fairy Shiny Iron Valiant.

To make the Ultra Ham Sandwich, you need the following ingredients:

The Ultra Ham Sandwich increases the chance of catching the Iron Valiant Fairy Shiny thanks to its “Fairy” Encounter Power.

That’s all you need to know about the Iron Valiant and how to catch it in Pokemon Scarlet And Violet. If you follow these instructions carefully, you will successfully add this majestic creature to your team and enjoy the thrill of its fighting ability! If you need more help with the game, here are some guides you may like: