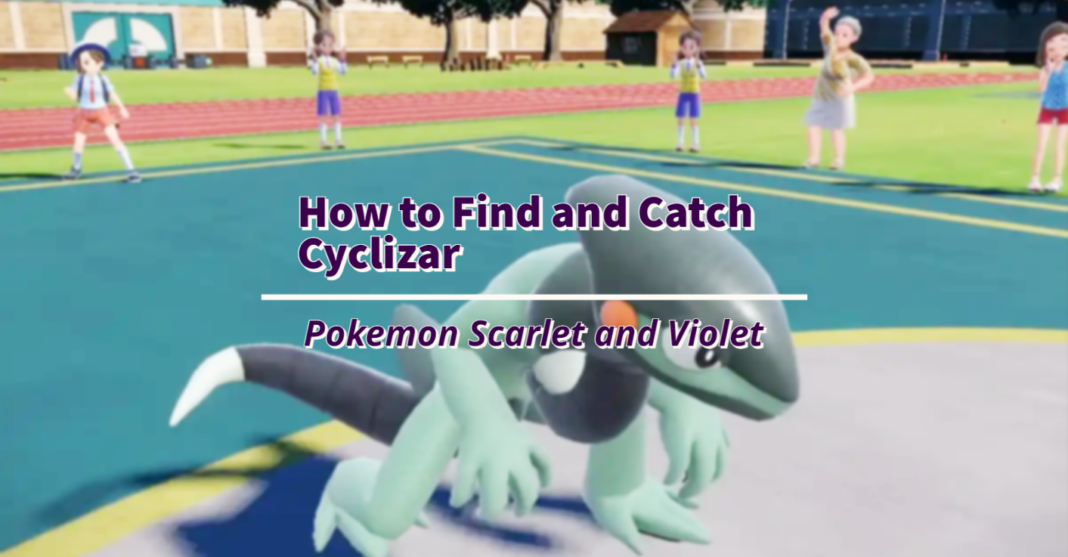 Meet Cyclizar—the Dragon/Normal type Paradox Pokemon, introduced to the world in Pokemon Scarlet And Violet games. This unique Pokemon will surely provide an exciting challenge as its powers and abilities present new ways for trainers to strategize. However, since it’s a paradox Pokémon, you don’t expect an evolution; instead, it appears to be the ancient relative of Koraideon and the futuristic relative of Miraidon. I’ll tell you how to catch Cyclizar in Pokemon Scarlet and Violet in this guide.

Where To Find Cyclizar (Location) in Pokemon Scarlet and Violet

Paldea is renowned for its Paradox Pokemon so that the Cyclizar can be found here. According to the Pokedex, this Pokemon can be located in Area Two of the West Province and East Province. If you can’t discover it here, why not make your way to the Artazon meadow? Just head away from the city and journey towards unfenced planes. Look around carefully until you find the Cyclizar.

The chances of finding this Pokemon in cities are slim, as it prefers to inhabit wild areas. The Cyclizar is aptly named as it moves quickly, swiftly rolling around the location. You must be fast enough to catch this Pokemon.

Although the Cyclizar does not undergo any evolution, it is still considered a Pokémon, just like its other counterparts. Consequently, you can increase your chances of success by utilizing sandwiches. The Cyclizar is a dragon-type Pokemon and can be found in its natural habitat. Gather avocado, smoked fillet, tomato slices, and a pinch of salt to craft the delicious Great Avocado Sandwich.

Note: If you are a fan of Pokemon Scarlet or its counterpart, Pokemon Violet, the Cyclizar can be found at the same place – no matter your preference!

How to Catch Cyclizar

After spotting the Cyclizar, use either Koraidon or Miraidon to weaken it. Once you’ve brought down its stamina and strength, all that’s left is to throw a Pokemon ball and watch as it joins your team.

If you happen upon a Wild Cyclizar, it is likely to have reached at least level 40. Select the ideal counter-Pokemon to capture this elusive Pokemon successfully; otherwise, catching the creature will be impossible. The Cyclizar is a Dragon/Normal-type Pokemon, therefore vulnerable to Ice, Fighting, Dragon, and Fairy-types. However, be aware that Ghost-type Pokemon won’t even have a chance to fight against it.

Cyclizar Base and Level 50 Stats

Shiny Cyclizar Location and How to Spawn

To catch Shiny Cyclizar, you must go to Levincia North and spawn at the Pokemon Center. Use your mount to head toward the ascending road and climb up the hill at the road’s edge.

Stand near the tree and look toward the spawn point in the distance. Set up your picnic table and use the following Shiny Cyclizar Sandwich recipe:

Cyclizars will keep spawning and running away; you only need to wait for a shiny to spawn. Make sure to save your game before setting up the picnic in case you need to reset the process.

That’s all you need to know about finding and capturing the Cyclizar in Pokemon Scarlet and Violet. With this guide, you should have no problem attempting to add this unique Paradox Pokemon to your team! Need more help catching other Pokemon? Here are some guides you may like: