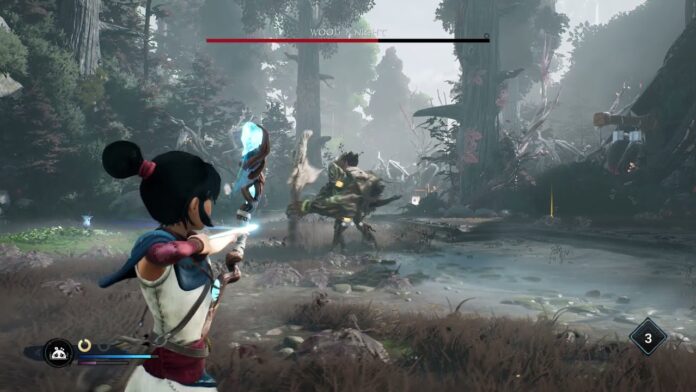 While Wood Knight might look intimidating, he isn’t the toughest boss you will face in the game. In fact, beating him is pretty simple if you know what to do. While facing the Wood Knight your best friends are the dodge mechanic and your bow.

The Wood Knight has multiple attacks so let’s break them down one by one and how you can counter them.

First, the most attack it has is a charge and dash. It runs towards you and pushes his weapon in your direction to attack. However, you can easily counter this by dodging to the right or left. You see him coming from a mile away so avoiding this attack is pretty easy.

Wood Knight then uses a throwing attack that is projected by its crouching. Wood Knight will crouch and throw the weapon in your direction. It is best to step back and dodge away while he is crouched because you know what’s coming. When he throws his weapon it comes back to him as well so avoid getting close to him until he summons the weapon back.

If you get too close to it, Wood Knight will often use a three-slash attack. Again, this can be avoided by jumping out of the way. He does slams his weapon on the ground as well but since it’s slow, it’s easily avoidable.

Now that you know how to counter its attack, let’s talk about how to attack it. Ranged attacks work best against Wood Knight. The pattern to beat it is pretty simple. Stay at a distance and use your bow. Get it every now and then to land a few melee hits before getting out of the way from his close-ranged attacks.

And that’s everything you need to know on how to beat Wood Knight. Need more help? See Ruins Rot Locations.