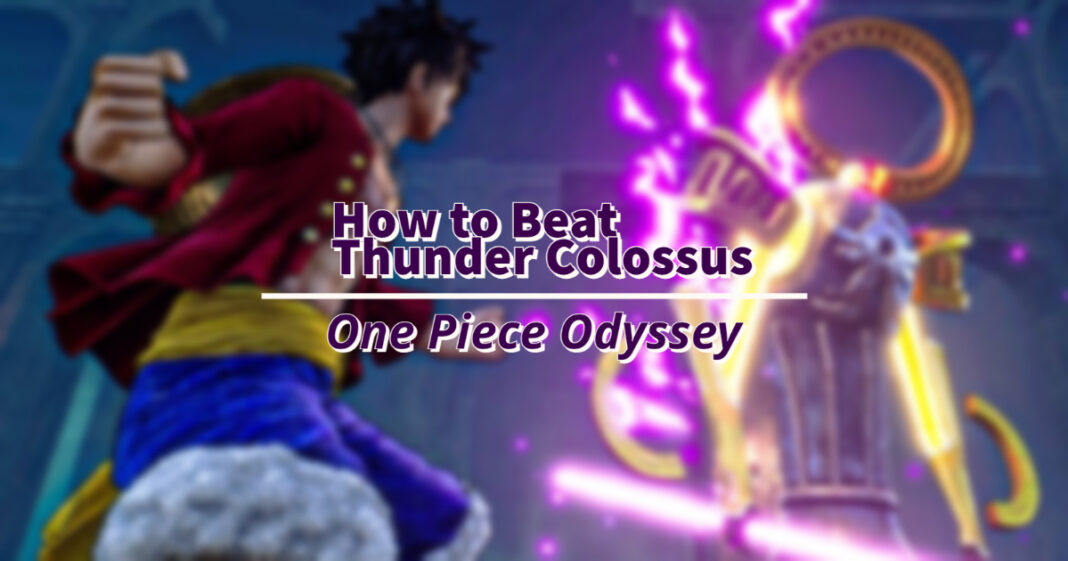 One Piece Odyssey strives to provide its players with a wholly entertaining experience, so they guarantee epic battles against unique bosses. As you progress through the game, one of your first unscripted bosses will be the Thunder Colossus found in Thunderhead Ruins. Prepare yourself for a thrilling encounter. In this guide, I’ll tell you how to beat the Thunder Colossus in One Piece Odyssey.

Where To Find Thunder Colossus

As previously mentioned, the Thunder Colossus is one of the first unscripted bosses you’ll encounter while exploring Thunderhead Ruins. When you arrive, you will be immediately taken aback by the myriad of light beams emanating from various directions that dance across the floor.

To begin your battle with the Thunder Colossus, you must disable its electric force field by finding and flipping the switches that power it. You can locate these switches by following a light beam; continuing to fight the Colossus is impossible without deactivating this electrifying barrier.

After trekking through the Thunderland Ruins, you will discover a source of light that must be connected to the door to fully access the boss’s location. A cutscene will start, showing the Thunder Colossus is held back by an electrical barrier. Your following step is to defeat a few enemies and turn off the switches that control this obstacle. Chopper would be ideal for this mission!

Once you’re out of the hole, make your way directly to your most beloved character. Don’t let enemies distract you – keep moving until you reach the vines. After scaling up the ladder and pressing that blue button one time, a switch will appear, which needs to be turned for the barrier around the Thunder Colossus to break down.

Take the ladder on your right, which will bring you to the platform below. You’ll find the second switch there. When you press the blue button, a dialogue box from your group member will appear. Here, you can indicate what action or intention is needed to break through the electrical barrier. Then once more, tap on the button, which will transform its color to orange before opening up a door slide.

Gather your courage, enter the door, and then jump to the platform below. Ahead of you stands the Thunder Colossus – move leftward until you spot a ladder leading up to a significant switch. Touch it twice to deactivate the power supply and complete your mission!

After you’ve taken a left onto the path where you last switched off, There will be an open door at your destination. Step inside and follow the light beams leading to a platform: ascend until you reach your final switch. Touch the switch to deactivate the electric barrier surrounding Hunder Colossus. Once you press down on the last switch, a cutscene will trigger, and the protective field dissipates. Descend towards lower platforms to gain access and start your battle!

How To Beat Thunder Colossus

Although Thunder Colossus and Fire Colossus appear similar, there is one defining difference; the former features a massive ring around its head, whereas the latter has an illuminated torch in hand. In addition, thunder Colossus holds a lightning bolt instead of Fire’s torch to distinguish itself further.

This boss has the following three attacks:

Deploy Luffy’s forces to stand against the thunderous Colossus and guard your kingdom against its wrath. Look no further than Luffy when you need a defense boost – his ability to absorb damage will be invaluable. Your team is quite weak, so remember your healing items and Chopper’s Care move to keep your squadmate’s health up.

Be sure that your party members remove the paralyzing effects of the Thunder Colossus’ attacks, or else you and your team may be left helpless. As you relentlessly heal and assault Thunder Colossus, nothing will stand in your way of conquering him.

In this fight, you can use any attack; however, it is recommended that Luffy be your primary aggressor as he serves as a tank. Pair Luffy’s attacks with Anji’s Basses Cote skill and Mouton Shoot to maximize his effectiveness in taking down the Thunder Colossus. Doing so will ensure that victory is yours.

That’s all you need to know to beat Thunder Colossus. Now that you have the know-how and focus lay down your strategy with confidence and show Thunder Colossus who is really in charge. Need more help with One Piece Odyssey? Here are some more guides you may like: