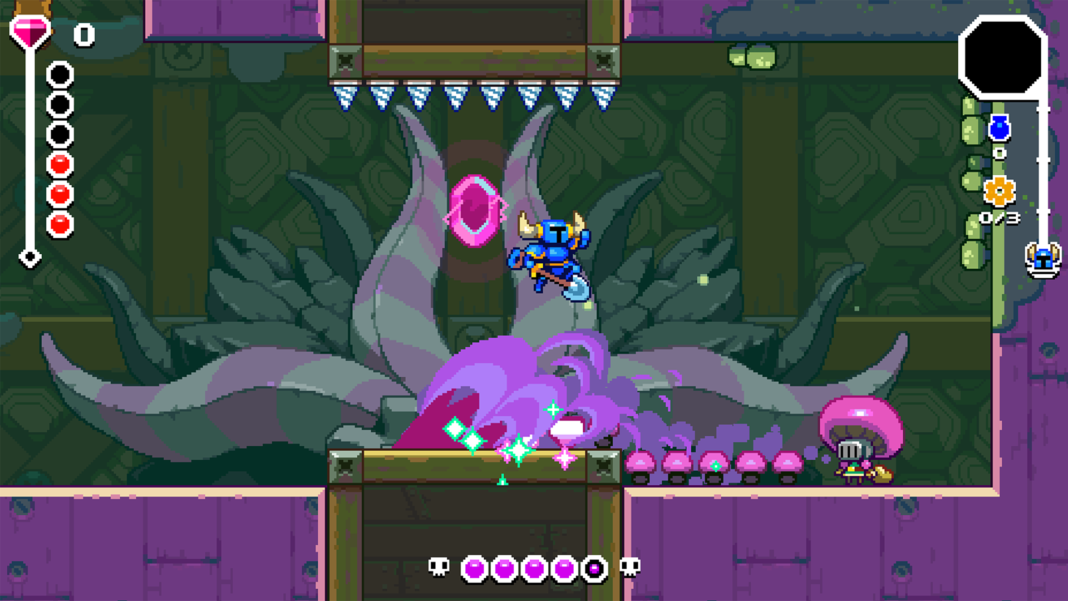 All the biomes in Shovel Knight Dig have a fellow knight used as a miniature boss battle. These little battles have now become a staple of these Shovel Knight games, and they are fun but also challenging sometimes. One knight in particular that can be a bit too tricky is the Spore Knight. He can be found in the Mushroom Mines biome, which is the first level of the game. Let’s see the ways to bring an end to the rain of the fungal foe.

Phase #1: As with most knights in this game, the Spore Knight also has multiple phases of the battle. In the first phase, he is not as difficult as the later bosses or even his later stage. The battlefield can have different shapes. If there are spikes up top, you must be vigilant and try to bounce off the Spore Knight or the Mushrooms that appear on your screen.

The basic attack of the Mushroom Knight is to throw his hat out like a frisbee before it returns to his head again. If you jump over it, you can get a few attacks on the knight before it returns. Do this a couple of times to defeat him. Watch out for his mushroom wave as well. You can remedy that attack by jumping over the Mushrooms.

Phase #2: The second phase of this knight is not as devastating as the second stage of other knights like the tinker knight. He just gains another attack when half his health is gone. This attack will include him jumping into the air and flinging spores on you. These spores can be deadly if they touch you, so you must avoid them at all costs. Take your time with the spore knight, and you’ll defeat him easily. Good luck!

That’s everything you need to know on how to beat Spore Knight; for more on Shoval Knight Dig, stay tuned!