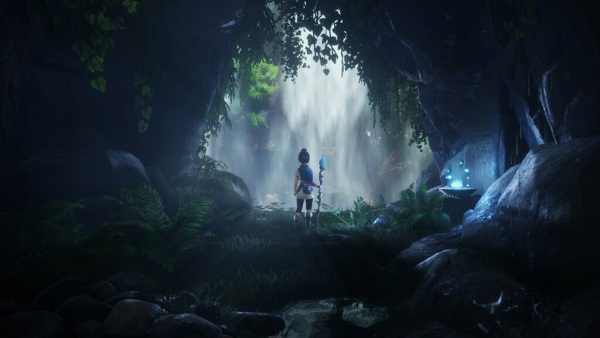 One of the bosses you face in Kena Bridge of Spirits is the Shrine Guardian. In this guide, we will detail everything you need to know on how to beat the Shrine Guardian. We will share his moveset and how to counter him. You will also find tips and tricks to use against him.

However, it won’t be long before he will summon them again. You get 30 or so seconds alone with him so it is crucial to make the most of that time. During your time alone with him, use the Spirit Bow’s Focus to slow down time and target the yellow spots on the Shrone Guardian.

You can also use melee attacks against the Shrine Guardian but watch out for the slash attack. It is telegraphed by a lean back. Dodge backward to avoid his slash-attack.

The attack that’s used the most us a small spin attack which can be dodged if you move away from the boss. The most dangerous attack is the ground pound. The Shrine Guardian will jump into the air and pound the ground.

As soon as you see him jump, run, and dodge as far away from him as possible. Not only the ground punch can do a lot of damage, but the ground pound also creates an energy blast for additional damage.

Getting too close for too long will cause the Shrine Guardian to pound his foot on the ground. It is best to avoid being greedy with your melee hits and get away before he is able to hit you.

Last but not least, the boss creates pink tendrils that come out of the ground and explode as well. The move is hard to predict but if you see him dig his arm into the ground, run away from the AoE.

To beat the Shrine Guardian, keep using the Focus to slow down time and target the yellow spots. Occasionally coming into land a few melee hits.