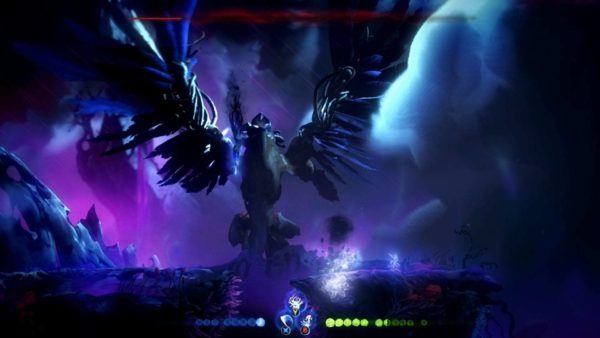 Ori And The Will Of The Wisps has plenty of challenging bosses and Shriek is the ultimate one as he is the final boss. Here we will help you with how to beat Shriek.

How To Defeat Shriek

Shriek is the final boss fight in Ori And The Will Of The Wisps and has three phases. Each phase is difficult than the last as the boss brings out new moves in each phase.

Before we start make sure you have the following Spirit Shards as they’ll prove to be beneficial during this boss fight.

The first phase of Shriek boss fight is fairly easy. You’ll see a white wind pattern and then birds will crash down on that spot. Obviously, you need to avoid that area. But try and stay close to Shriek as the boss will sit down for a while after this attack. Head is the only area where you can deal damage.

The second attack the boss will use will be his landing attack followed by a shriek that deals damage if you get caught in the sound waves. This attack can be telegraphed with Shriek turning his head the other way. As soon as the boss turns head, go to the other way, propel upwards and deal damage.

Also, propel Ori upwards while slashing on the boss’ head to deal damage. Light Burst attack will prove very helpful in chipping away a good chunk of its health.

Shriek also uses projectile attacks which you can sling back at it. Just make sure you are aiming for its head while slinging them back as that is the only vulnerable area. The boss will throw the projectile while being in the center or from one of the sides.

Another attack this boss uses is the sweep attack. A black wind-like pattern will appear before it’s sweep attack. You need to use Propel, double jump, and dash to avoid damage.

Keep following these patterns and after dealing enough damage, Shriek will destroy the arena. Ori then needs to do a bit of platforming before the second phase.

In this phase, Shriek has a new projectile attack that calls a giant bird that sits on the same platform as Ori’s and then rains projectiles. These projectiles can be slung but it’s best to just avoid them.

Also, Shriek uses its sweep attack in different directions. The seep attack will usually be used right after the projectile attack. As soon as you see the win-like patten use propel to avoid damage.

Shriek uses another projectile attack. It’ll hover at the side of the area and then drop white projectiles at Ori. Avoid the projectiles and jump towards Shriek’s head and you can land a few good hits using the Spirit Edge attack.

Keep in mind that an Energy shard will frequently respawn so use it to keep Ori’s health full as you are going t need it in the next and final phase of the boss fight. Deal enough damage and Shriek will start destroying the arena and after that, the final phase begins.

In this phase, you don’t have any platforms instead you have to use the projectiles to keep Ori in the air. If you misjudge a jump then use Propel Spirit Shard.

Sling the projectiles back at the boss or use Light Burst attack if you have enough energy. Just follow these patterns and eventually Shriek will have zero health and you have won the boss fight.