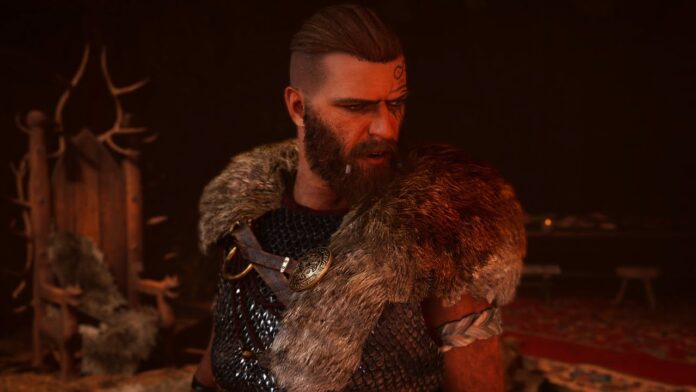 Assassin’s Creed Valhalla features plenty of tough enemies but very few are as annoying as Rikiwulf. He isn’t very tough to beat but he is simply annoying because of his extremely poor trash talk skills. This guide will take you through the entire Rikiwulf boss fight in Assassin’s Creed Valhalla to help you beat him with ease. You will get a better understanding of his attacks to defeat Rikiwulf effectively in AC Valhalla.

You come face to face with Rikiwulf during the first main mission of Valhalla, Honor Bound. It is a very early mission where your objective to free your clan members from certain death. Rikiwulf wants your clan members dead so it is up to you to defeat Rikiwulf and save your clan in Assassin’s Creed Valhalla. The Rikiwulf boss fight is the very first major boss encounter in Valhalla.

Rikiwulf has two primary weapons at his disposal. He wields a two-handed axe (heavy weapon), and two one-handed hammers (light weapons). You can parry and dodge his attacks but not every attack can be parried. Rikiwulf uses an overhead swing, an uppercut swing that is telegraphed with a red aura. All red aura attacks can not be parried so the only way to protect yourself is to dodge right or left.

Once you successfully dodge a red aura attack, Rikiwulf will be vulnerable for a short time. This is your window to land a few hits before putting your guard back on. Do not be greedy though, Rikiwulf can quickly counterattack if you overuse your attack window.

When you manage to bring him down to 50% Rikiwulf will drop the two-handed heavy weapon. Now you face a hammer-wielding Rikiwulf. The two -one-handed hammers make Rikiwulf a faster foe which makes it harder to beat him in Assassin’s Creed Valhalla.

You can easily dodge his hammer attacks but I suggest you parry and counter-attack instead. Parrying attacks will give you opportunities to attack him. Use the shield to parry his attacks and get the much-needed advantage. When you perform a successful parry, it will knock back Rikiwulf, making him vulnerable to your attacks. When you knock him back he’ll kneel for a short time, attack him as many times as possible before he gets back up on his feet.

While Rikiwulf wields the dual hammers, he also utilizes a new front kick attack so beware of that. His front kick is telegraphed by a red flash which gives you an opportunity to get out of dodge. Use these tips to beat Rikiwulf in Assassin’s Creed Valhalla.