Home Guides Nioh 2 How To Beat Kasha In Nioh 2 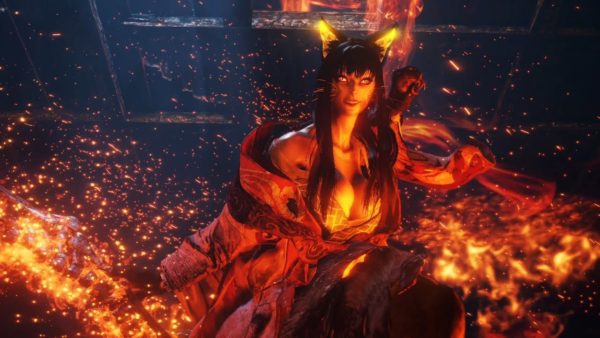 Our Nioh 2 guide will help you step-by-step with all of the tips and tricks you need to know to beat Kasha as she’s one of the toughest bosses in the game.

How To Defeat Kasha

Kash is a boss that you’ll encounter in “The Frenzied Blaze” main mission. Spear is the recommended weapon as it’ll prove more useful compared to others. Here is how to defeat Kasha. Before we begin, save your Yokai Shift for when her health is below 10%.

The arena is big enough that you can run around to dodge her attacks. Kasha moves around on two wheels that leave behind a trail of fire and she is capable of launching area of effect attacks with her wheels. She can also create circles to trap you in.

You need to have Firestop Talisman which increases your character’s fire resistance. If you have the “Firebreak II” skill in the Onmyo skill tree then you get 8+ fire resistance.

There are two of her attacks that you can use to your advantage as Kasha doesn’t counter attack after landing those. After these attacks, you can land your best combo to deal significant damage.

One of those is when Kasha runs towards your character and leaves a trail of fire. Dodge this attack to the right and as soon as she runs pasts your character, follow her and as she stops, use your best combo on her as she won’t be able to do anything for around 4 seconds. Also, if you manage to break one of the yellow crystals on her wheels, then it’ll deal bonus damage.

The second Kasha attack that you can exploit in when she charges towards your character with a red aura in a straight line. Again, she’ll leave a trail of fire. This time too she’ll be unresponsive for around 4 seconds so again, land your best combo on her.

Other than these two attacks, Kasha is quite dangerous and you shouldn’t be near her when she attacks. If she attacks you and you are in reach then just block her attacks.

Otherwise, just run away in a straight line. Notice that I didn’t use the word dodge, as dodging has a chance of your character being hit by her whip attack.

She’ll also summon a sawblade as she goes into the Dark Realm mode. The sawblade is homing in nature and will follow you for about 30 seconds. Just keep running while it follows you.

This isn’t the only Dark Realm attack from her as she will summon two small Gaki. Interestingly, the Gaki has half the health of a normal one but they deal double the damage. Also, they are very aggressive and you need to kill them as quickly as possible.

While doing this, you also need to keep an eye out for Kasha’s fire trail attacks after which she is defenseless for almost 4 seconds. As I mentioned above, If you have Yokai Shift, then save it for the last 10% of her health.

While Kasha is one of the hardest bosses in Nioh 2 but keep repeating these moves and eventually, you’ll defeat her. Just don’t rush and get burned.

That is all for our Nioh 2 guide on how to defeat Kasha. For more on the game also see our Viper’s Sanctum Kodama Locations Guide and Odachi Paralyzing Stun Build Guide.