RespawnFirst
Home Guides Ori and the Will of the Wisps How To Beat Mora The Spider Boss In Ori And The Will... 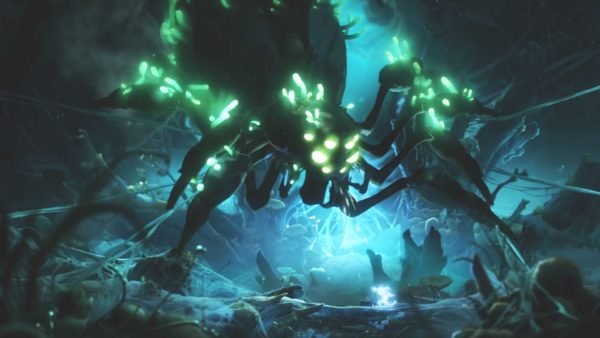 How To Beat Mora

Mora is one of the many bosses you can fight in Ori And The Will Of The Wisps. Like all of the other boss fights in the game, this one is challenging as Mora has multiple forms or stages. Players are required to have patience and nerves of steel to defeat this boss.

Abilities
You can use the abilities of your own choice while facing Mora The Spider. But, the following abilities will prove to be much more beneficial in the boss fight.

Spirit Shards
Like the abilities mentioned above, the following Spirit Shards will yield the best result while fighting Mora The Spider.

In the first phase of the Mora the Spider boss fight, you need grapple and sling abilities to keep Ori off the ground and use the walls as balance. There is a blue energy crystal on top of the left wall.

Jump on either of the walls to use it as a platform to jump and slash Mora and then back at the wall. use Sticky to keep Ori up there and when the Spider attacks, jump and land a few its on its head and return to the wall.

Keep in mind that Mora’s head is the only place where you can inflict damage. Another way to hit Mora is by walking past the Spider’s floor hits and hit the head whenever possible. Also, use Flash to protect Ori from dying in darkness. Repeat these attacks until Mora The Spider stumbles back and the second phase begins.

the second phase of the boss fight takes place in a relatively large area and Mora will spawn smaller spiders. Take them out as quickly as you can and you can also use them to jump up in the air. Also, dodge Mora’s laser beams along the floor by jumping up the wall.

Mora will also throw fireballs at Ori which you can bounce back at The Spider to inflict damage. Get used to this attack as you’ll be using it quite a lot moving forward in the boss fight.

Also, the right wall has a web that can be used for cover. If the Spider hits that wall, it’ll reveal a crystal. In short, keep attacking the head and deflect those fireballs back at the spider.

In this phase, you’ll fight in a new arena as Mora stumbles backward and creates a new orange mark that you can burst off of. In this phase, Mora will be chasing you while you need to overcome obstacles without getting caught. You’ll be chased until you reach a tree log. Use the blue mark to burst into the Tree log to open the next area.

The last phase of the boss fight is quite similar to phase 2 as Mora will spawn small spiders, throw fireballs at Ori and will use laser beams. What you need to do is stick to the far left wall. Jump up the wall and while Ori is coming down, slash as much as you can and then climb up again.

While Ori won’t be completely safe but Mora’s attacks aren’t as frequent in this area and Ori will be mostly safe from the spider’s attacks. Use Flash ability so that Ori won’t die in darkness. If you can’t use Flash for some reason or don’t have it then use the yellow marks as a light source by bouncing on them. Repeat these attacks and dodges until you defeat Mora The Spider.

That is all for our tips and tricks on how to beat the Mora The Spider in Ori And The Will Of The Wisps. For more on Will Of The Wisps also see our How to Beat Horn Beetle and Abilities Guide.