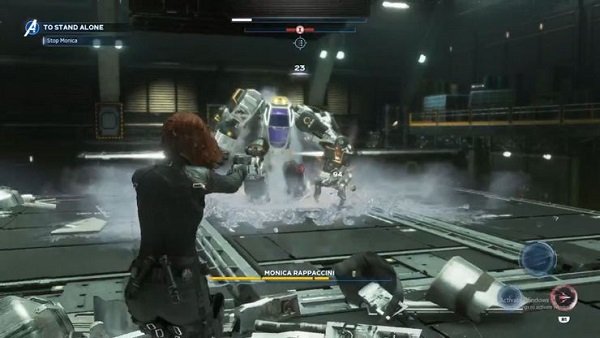 How to Beat Monica Rappacini in Avengers – Phase 1, 2, and 3 Tips and Tricks

There are three-phases to Monica’s boss battle. The boss fight is centered around Monica and Black Widow, no other Avengers is present during this encounter. Monica is a story mission boss who comes to face Black Widow in “To Stand Alone.” The boss fight takes place inside a room-filling with toxic gas. You need to kill Monica before the room fills with gas and kills the Black Widow.

The battle area for Monica’s boss fight is a bit restrictive. The ground is filled with gas which means dropping down will cause damage to Black Widow. However, Widow won’t immediately die if she falls into the gas. You can actually use the gas to go down and find a better position to attack at the cost of some health.

How to Beat Monica in Phase 1

At the start of the boss battle, you will face Monica’s melee and ranged attacks. If Black Widow gets close to Monica she will attack with a 2-punch melee move. Widow is better at ranged combat so use this to your advantage. Keep your distance from Monica Rappacini and use pistols to deal damage. Once cause enough damage to Monica’s mech drones will enter the arena to assist her. Focus on the drones before targeting Monica again. Taking down the drones will trigger phase 2 of Marvel’s Avengers Monica Rappacini boss fight.

How to Beat Monica in Phase 2

In Phase 2 of this Avengers boss fight, Monica gets a rush attack which means keeping your distance doesn’t work as well anymore. Avoid being hit with her Rush attack by jumping out of the way. If Monica’s Rush attack connects, Black Widow will experience a significant HP loss. Monica Rappacini will also summon Proto-Synthoids during Phase 2 of this boss battle. Later she will call an Adaptiod. Take them all down before focusing on Monica.

How to Beat Monica in Phase 3

In Phase 2 Monica gets the Ground Smash move. She will use her suit’s arms to attack the Black Widow. Use jump or your grapple to move around of the way. You can roll and move out of the way easily.