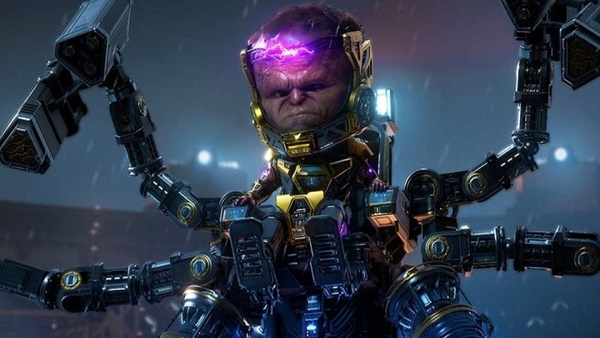 Modok Boss fight has 3 phases or sections. The first two phases are your traditional boss fight sections but the final phase 3 is pretty much all QTE against Kree.

At the start of the boss fight, you will be in the middle of the Quarantine Zone as you follow signals from the beacons. Soon Modok will appear and the battle will begin after a short cutscene. You need to take down the thrusters to beat Modok in phase 1 of his boss fight. You will be using Iron Man’s ranged attack to destroy the thrusters. Modok will target Tony with his laser attacks but keep shooting the thrusters as you avoid the laser. Once you manage to destroy Modok’s thrusters he will come down to the ground with his one remaining thruster.

When Modok comes down you will switch to Captain America. The objective now is to destroy the main thrusters, the source of his flight. The thrusters are at the bottom of Modok. Use Captain America’s shield to damage the thrusters but be careful, Modok will attack. You can jump to avoid his sweeping attacks. When Captain America does enough damage to the thrusters Modok will fall to the ground which gives Avengers an opportunity to attack. Bring Modok down three times and target the generators to move to the final phase of this boss fight.

The battle is far from over as Modok still has some life left in him. Thankfully, you take control of Thor in Phase 3. Modok will hide behind a shield that can only be broken by summoning the Bifrost. Takedown the adds and then focus on Modok once you have your Ultimate Heroic ability charged. Thor’s bifront will break open Modok’s shield which then triggers a cutscene. You will now play as Black Widow. Modok uses his psionic attacks and rush the battlefield to damage Black Widow. He also uses missile attacks for ranged damage. Use Black Widow’s ranged attacks to damage Modok’s health. Modok has 2 wave attacks, you can simply jump to avoid both attacks.

Modok has summoned his Kree Sentry, a giant robot created by him. The robot is controlled through the headband on Modok’s head. The Modok boss fight now reloves around the latest addition to the Avengers rosters, Kamala Khan. This is pretty much a QTE section so you can easily beat Modok and end Marvel’s Avengers.