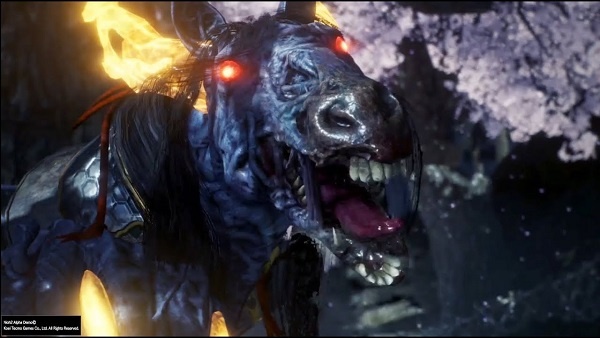 During the main mission “The Village of the Cursed Blossoms” you come across Mezuki, one of the bosses in Nioh 2. Mezuki looks like a massive horse and uses a long sword to attack. The sword has range on it so Mezuki’s attacks can reach far and wide. In our Nioh 2 Mezuki Boss guide, we will explain how to beat this creature.

Defeating Mezuki isn’t that hard if you properly study its attacks. In addition to the long sword the boss can sometimes use grapple or shoot skulls from afar. To beat Mezuki you must break its Ki bar, this is the key to winning this boss fight. Once you achieve this you will be able to stagger Mezuki and attack uninterrupted for a few seconds. It is always best to do a practice round first to study his attack pattern. Once the fight starts make sure to stay away for a while and not worry about attacking it. Study what he does, and how he behaves during the fight. Once you have all of his combos memorized it is time to take this beast down. You will notice that he has a 3 attack combo and we suggest that this is the time to attack. When Mezuki is done with his 3 attack combo, use the opportunity to attack but don’t get carried away.

We suggest using a Spear for this boss fight so land 2 high stance attacks with the spear after Mezuki’s 3 combo attack ends. Keep in mind that you will have to figure out just how far you can hit with the spear. Bait the boss to attack you by being within its attack range but move back to avoid damage. Wait for the combo to finish before making your move. Watch out for its charged up attack that is telegraphed with a red glow, you can use R2+Circle to counter this move. When you are able to deplete its Ki for the very first time, it will summon a Yokai Realm that slows down your Ki regeneration and makes him stronger. Just counter his red charged attack with Burst Counters and attack when it’s safe to.

This marks the end of our Nioh 2 Mezuki boss fight. If you need more help with the game check out our Guardian Spirits, Yokai Shift, and Samurai Skills guide.