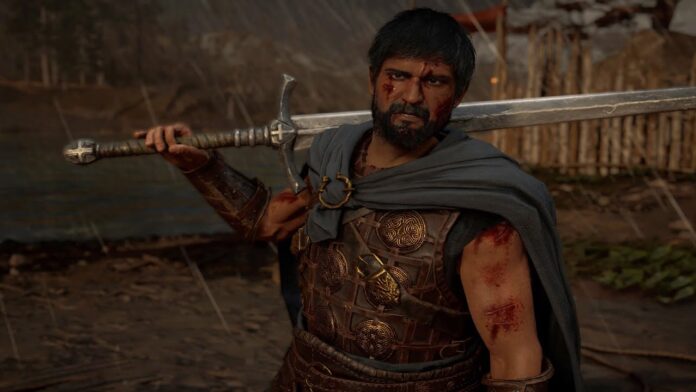 When you reach the Isle of Waifs make sure to gather as many resources as possible. Pick up nearby plants and rations to heal because Leofrith will do a lot of damage to your HP during the boss fight. There are two phases to Leofrith’s boss fight and at the end of the second phase, you are able to beat him for good.

In the first phase of the boss fight, you should be defensive. The majority of the fight should be about parrying attacks and making sure you keep your healing items for the second phase. All of his attacks are pretty easy to dodge or parry thanks to the orange aura that telegraphs all incoming attacks. Use your shield to block his orange attacks to reduce his stamina bar. He will be vulnerable for a short time after you parry his attacks but you can only land a couple of hits. DO NOT get greedy with it or else will cause a lot of damage with his counterattacks.

In addition to orange attacks, Leofrith has red aura attacks that can not be blocked by Eivor. The only way to protect yourself from Leofrith’s red attacks in this boss fight is by moving out of the way. Dodge backward to move out of the way to avoid his red glowing attacks.

During the second phase of Leofrith boss fight the situation drastically changes. His attacks become faster as he gets more aggressive. He also makes it much harder to hit him so there is no point in staying defensive during phase 2 of Leofrith boss fight. The technique in the second phase is to parry his attacks and use the oppertunity to land a few hits every time. Do not mash buttons while attacking him becuase if he jump back to avoid your quick attacks, you’ll become vulnerable. In the second phase, he will once again try to lure you in but at this point you already know how to handle it. Use ranged attacks to deal a good amount of damage when you see the blue symbol on his head.

Once you manage to drain his health bar, you will beat Leofrith in Assassin’s Creed Valhalla. The next step is to decide if you want to kill Leofrith or spare his life. Eivor see an Odin Vision where the God himself asks Eivor to make the decision – kill or spare? Spare Leofrith in Assassin’s Creed Valhalla. As soon as you spare him, Eivor will explain to Leofrith how his King abandoned him and his people. Leofrith will be great and share some critical information with Eivor. At the end of the cut-scene, Hunted quest will begin for Eivor.