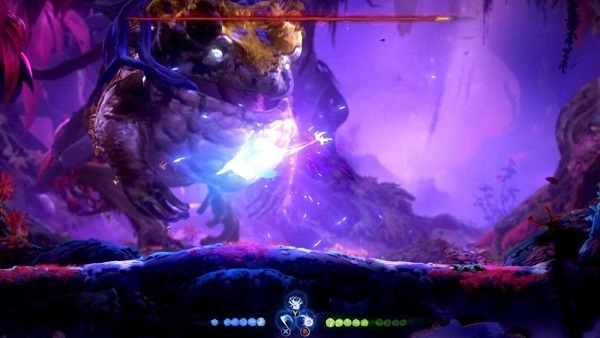 Kwolok is a giant toad who is corrupted and has a variety of attacks at his disposal. It can easily make changes to the battle arena and also uses ranged attacks to damage the player. Kwolok can cause enough damage to push your HP bar down to zero. During this boss fight, I was often reminded of Cuphead, brought back traumatic memories. There are two phases of the Kwolok boss fight and unfortunately, if you die in during any of the two phases, you end up starting all over again. Understanding how to manipulate Kwolok in this Ori and the Will of the Wisps boss fight is key to your success.

Ori isn’t completely defenseless against the giant beast. There are many skills and attacks at his disposal that’ll cause serious damage to Kwolok. Before the Kwolok boss fight begins, make sure to equip Spirit Star ability. This move allows you to throw a shrunken at Kwolok that spins around comes back to Ori. It is a ranged attack you can use over and over again and is a source of continuous damage to Kwolok. Since the boss has a huge hitbox it is very easy for you to target him from a distance. Moreover, you can use Reckless Shard for a 15% damage boost but at the cost of taking more damage from Kwolok. Last but not the least, getting your health back up is important to make sure you have Regenerate skill equipped as well.

Tips for Kwolok Phase One

During the first phase of Ori and the Will of the Wisps Kwolok boss fight, the enemy will be hovering above you. In phase one Kwolok can perform both close and long-ranged attacks. As soon as the boss fight starts, use a Spirit Star and run to either left or right depending on the position of the boss. The best idea is to be defensive during this phase due to Kwolok’s ability to perform long-ranged attacks. Following are the attacks Kwolok can use during Phase One.

As you can see Kwolok has a wide range of attacks at its disposal. The easiest to get out of are belly flops and projectiles. When you see Kwolok hovering over you dash away from its attacks and use a Spirit Star followed by quick strikes. Keep an eye out for his shockwave to avoid taking damage. Use his projectile attack to your advantage as you can deflect it back at him. If you manage to successfully hit back at him the toad will take damage but it will also be stunned for a bit. Use these few seconds to your advantage and deal as much damage as you can to Kwolok. After taking some damage the toad will smash the floor apart and turn it into a spike pit. If you are quick enough you can turn it into phase two.

Once you manage to take down 1/3 of Kwolok’s HP, the toad will call down water and flood half of the battle arena. In addition to making changes to the arena, Kwolok will get a new set of moves to make your life miserable in this Ori and the Will of the Wisps boss fight. Following are two new attacks in Phase Two of Kwolok boss fight.

The ink attack is extremely dangerous as the black ink in the water can deal quite a lot of damage to Ori. Make sure to jump in the water when he fires ink.  The ink will fade away in time. When you see Kwolok go underwater make sure to stay below the surface to avoid taking damage from the corrupting parasite. Use dash ability to avoid being sucked in and use a hit and run plan. Dash out of the water and use your Spirit Star before heading back down. You’ll notice a crystal in the bottom right section that is a constant source of energy nodes. To beat Kwolok in phase two you should only attack in between his moves.