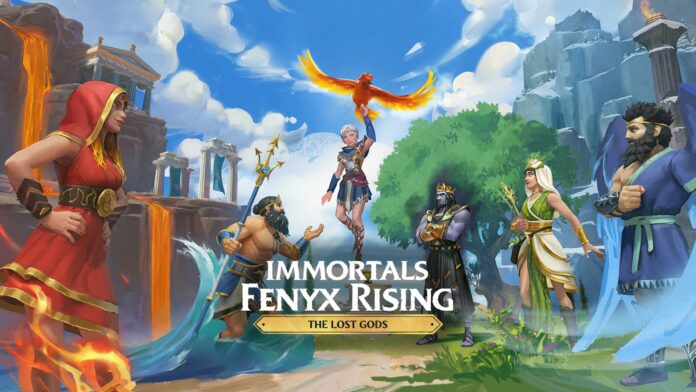 The final boss in the Lost Gods DLC is none other than Kronos, the Devourer. During the final stages of the game, you will come across Kronos. He wields a giant Sickle that does a ton of damage to Ash. In this guide, we will discuss everything you need to know on how to beat Kronos in Lost Gods DLC of Immortals Fenyx Rising.

The battle starts with Kronos putting his Sickle down on Ash but it getting stuck in the ground for a bit. This gives you an opportunity to attack him so land as many shots as possible.

In the beginning, you should only perform ranged attacks. Fire arrows are effective against Kronos. Keep chipping away at his health with arrows. Meanwhile, dodge his swings and watch out for lava raining down on you. Both attacks aren’t very hard to avoid. What you need to keep in mind is that when he pits his sickle down, a shockwave will release from its center soon after. You can double jump to avoid the shockwave.

The lava is telegraphed with golden circles on the ground. Keep away from that area to avoid burn damage. Occasionally, Kronos will summon multiple minions to the battle arena. When he does, he will put down his Sickle for a short time before going back to swinging at you.

You will have to deal with the enemies while avoiding his swinging melee attacks. Once you get his health down to 75%, he will try to squash you down with his fist. If you successfully avoid his attack, his fist will stay in position for a short time which gives you the opportunity to land a few hits.

When his health drops to 50%, Poseidon will siphon his power and shrink him down to size and the battle continues. In the second phase, the Kronos smashes his sickle on the ground to create a shockwave which can be avoided by dodging sideways (right or left). His second is a charge move toward you which can also be avoided the same way. Ranged attacks are effective here but you can also land melee hits if you manage to dodge his charge attack while remaining close to his body.