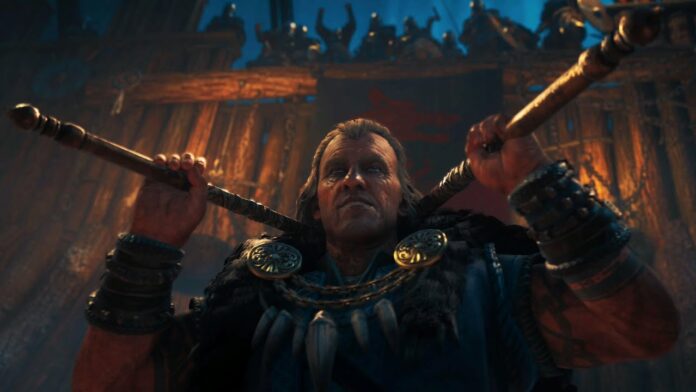 Assassin’s Creed Valhalla: How to Beat Kjotve The Cruel

In the massive open world of Valhalla, you will come across many bosses but none are as “wanna-be tough guys” as Kjotve The Cruel. Although he is a tough competitor, once you get enough information about his attacks you can easily beat him. All you need is a bit of patience.

Kjotve The Cruel kills Eivor at the start of the boss fight but there is nothing to worry about. The death of Eivor is a way to introduce Odin visions in Assassin’s Creed Valhalla. After the first Odin vision ends, Eivor will stand up to fight Kjotve The Cruel.

Kjotve The Cruel comes at you aggressively which is sometimes overwhelming. The best thing to do is lock on to him so you can better dodge his movement and attacks. If you are playing on the controller use the right analog stick to lock on to Kjotve The Cruel.

This boss has two main attacks and only one of them can be blocked by Eivor. Look for the Golden aura around him as it indicates an incoming attack. The golden attacks can be blocked, in fact, they can be parried as well. To beat Kjotve The Cruel you need to parry all of his golden attacks to create opportunities for yourself to land a few hits. Wait for him to attack you and parry his attack, that’s the primary method to defeat Kjotve The Cruel.

The second attack type generates a red aura around Kjotve The Cruel. Eivor can’t parry this attack so the best way to protect yourself is by moving out of the way. Simply dodge the red glowing attack. When his HP comes down to 50%, he will knock you into a new area where the same fight continues.

And that’s how you beat Kjotve The Cruel in Assassin’s Creed Valhalla. If you need more help with the game check out our Valhalla Wiki.