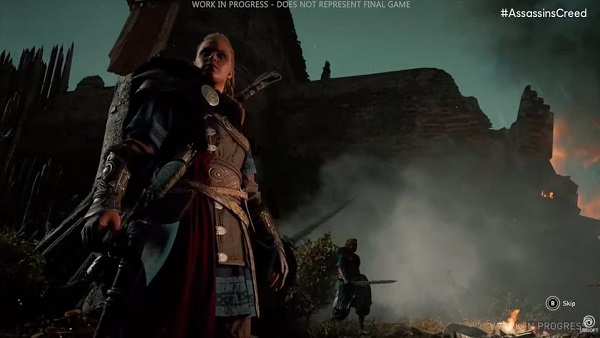 Ivarr was a companion for Eivor for a long time but because of what he did to Ceolbert, Eivor has to kill him. Ivarr’s weak points are on his right leg and left arm. Hit his weak points with your arrows to take your his stun bar. Ivarr is using two axes to attack Eivor, he has a red rune attack that you can’t parry so dodge it.

His moves are similar to other enemies; he will dash right and left and swipe with his weapons. He can kick up from the ground and perform a spinning attack. If you are on the ground Ivarr will jump at you and slam his back down so make sure to get up quickly to avoid taking damage.

When you lower his health bar to a certain level Ivarr will ask you to speak with you but don’t fall for it. Keep an eye on a dodge button that you need to hit as soon as it appears. If you miss the dodge button there’s nothing to worry about as it won’t cause too much damage. Keep chipping away at his health bar and when a cut-scene starts it means the boss fight is over.

Once you defeat Ivarr you can either choose to send him to Valhalla or deny him Valhalla. It is up to you but since he killed Eivor’s friend, it is only fair to deny him Valhalla. After the boss fight, go back to Quatford and speak to Deorlaf.

When Ubba talks about Ivarr’s death you can tell him that he died well (lie), tell him he died badly (truth), or that he wanted to die (somewhat true). If you lie to Ubba he will come back to confront you later on in the game. However, tell him the truth and he will appreciate your honesty.

You can also check out Eadwyn, Rued, and Loki boss fights. Or head over to Assassin’s Creed Valhalla Wiki for more.