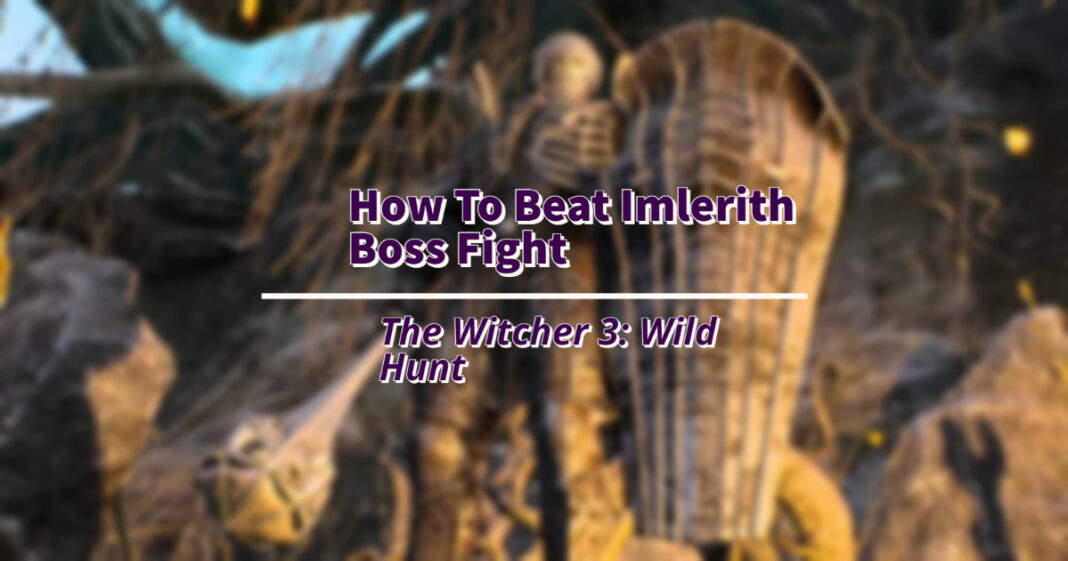 Imlerith is one of the most powerful generals in the Wild Hunt, next to Caranthir Ar-Feiniel. This General wields tremendous power and has proven to be one of Geralt’s most dangerous adversaries. Oddly, though, they used to be close acquaintances that have now transformed into enemies. Imlerith is determined to take Ciri captive to present her as a gift to Eredin, his leader. In this guide, I’ll tell you how to Beat Imlrerith in The Witcher 3.

Where To Find Imlerith (Location)

Imlerith is featured in several quests that eventually culminate in the epic Battle of Kaer Morhen. As Geralt and his allies prepare to confront the dreaded enemy, their last stand at Bald Mountain will initiate a thrilling battle against an unstoppable force called Imlerith.

After you defeat the Crones in the game, follow the path that leads to a majestic tree. When you spot a yellow Place of Power, communicate with it so you’ll be rewarded with an ability point. Once attained, proceed up the incline for more surprises. When you arrive at the ledge, traverse it and stay on this path that eventually leads to Imlerith. Once you have negotiated with Imlerith and he has donned his helmet, be prepared to engage in combat.

Imlerith is the General of The Witcher 3: The Wild Hunt, so you can’t take him lightly, as he can quickly put you in deep water. However, if you plan to prevail against him, your only choice is to wield the Silver Sword as a weapon and select Quen from the list of magical signs. Then, to strengthen your sword and ensure victory, use Elementa Oil before engaging with the Imlerith’s summons.

Imlerith will utilize his buff to defend himself. He creates a protective shield of frost armor around him. Unleash the power of Igni Sign to defeat your enemy’s armor. Utilize Axii Sign for a brief yet effective stun on Imlerith that will allow you to deliver punishing blows as you seek victory.

To stand a fighting chance against Imlerith, you must equip yourself with the Grapeshot and Samum bombs – these work similarly to Igni Sign. To further increase your chances of survival during this intense battle, prepare either Swallow or Tawny Owl beforehand. Additionally, use Thunderbolt Potions for maximal damage output.

Be prepared to dodge Imlerith’s imminent strikes. You should equip yourself with either Griffin School Gear or Skellige armor for your safety. Don’t be deceived into believing that because he wears heavy forest armor, his attacks will be slow; this misconception could prove fatal in the face of battle.

Imlerith is not only lightning-fast but also able to teleport. Don’t even contemplate blocking his strikes – that’s next to impossible! Your best bet is simply dodging them and staying out of harm’s way. Now let’s begin!

Initially, Imlerith will stick to using his mace and protective armor. He won’t use the teleport ability at this point, either. During his mace attacks, he’ll combine two or three strikes before resetting himself – so dodge by rolling to the sides and try to get behind it as much as possible.

This boss needs a few moments to reposition himself; use this as your opportunity to strike. Taking advantage of this respite, the optimal strategy would be to strike from his side or back. This method will allow you to land two or three strikes, so don’t get greedy with your offense.

To take down the Ice Armor, use the Igni Sign to blast it into oblivion at once. After that, quickly activate Quen Sign to shield yourself from potential harm. To succeed, you must adopt a slow and steady approach. By the conclusion of Phase 1, Imlerith’s health will be reduced to one-third; his shield will also be destroyed before moving on to Phase 2.

As you progress into phase 2 of your battle against Imlerith, it will become more complex than anything else you have faced. After you damage his shield in Phase 1, he will become even more swift and hazardous. He may also use teleportation – be aware that he could abruptly appear behind you if this happens; roll forward at least twice to create distance. Even in phase 2, Quen is your best bet to beat Imlerith.

To survive in the battle, you must remain vigilant and utilize defensive tactics such as dodging and rolling to avoid your opponent’s dangerous attacking pattern.

For phase 2, Imlerith combines different attacks against you. Now he is preparing to use a combo of four offensive moves and will attempt to mace the ground to damage you. If you roll away multiple times and dodge his strikes, this presents a prime opportunity to land multiple successful hits.

When you encounter this boss, he likely used teleportation; utilize the Igni sign to destroy his frost armor and give yourself an edge in battle. Even in phase 2, to succeed, you must adopt a slow and steady approach.

After persistently attacking Imlerith until only 5% of his HP remains, the cut scene would automatically initiates, and Geralt thrusts a sword into Imlerith’s abdomen.

Geralt then uses the Igni sign on Imlerith’s face, causing him to kneel before Geralt and remove his helm in defeat, revealing a burnt face. With victory within grasp, Geralt seizes Imlerith’s mace and strikes it down hard against his head – thus concluding their battle.

By deafening Imlerith, Geralt will be rewarded with the prized Magic Acorn and additional loot. After searching his body, you’ll locate the Magic Acorn that grants two ability points to whoever possesses it. Want to know more about The Witcher 3? Here are some guides you might like: