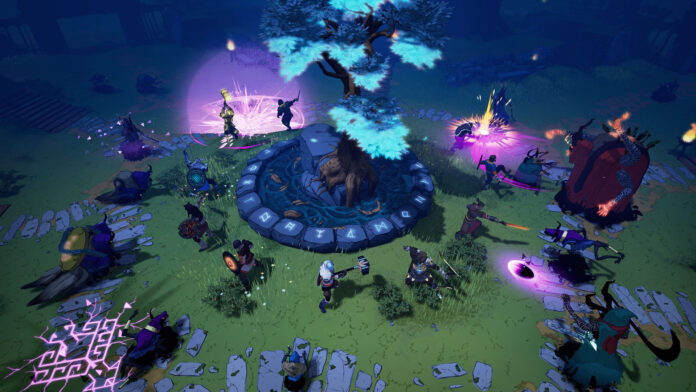 There are four primary Jotnar aka bosses you face in Tribes of Midgard. Among them is our very own Geirrödr. The mighty beast is a great starter boss and in my experience didn’t really put up that much of a fight. Still, he isn’t someone to be taken lightly. If you go in unprepared and don’t know what you’re doing, he will slaughter you. In this guide, we will discuss everything you need to know on how to beat Jarnsaxa in Tribes of Midgard.

Geirröðr is not a hard boss to take down even if you are playing solo. He has some close-range attacks and uses ice projectiles to bring you down. He also uses a ground pound that creates icy spikes within an AoE.

The ground pound is telegraphed by raising both his arms. You can simply jump back to avoid the AoE. Also, watch out for the balls of ice he throws at you but again, they are easy to avoid if you simply keep running in the opposite direction.

The best weapon to use against Geirröðr is a bow. Use long-range bows to attack him from a distance as getting close to him would mean certain death.

What’s interesting is that he doesn’t have any attack that does lasting damage. For example, the ground pound creates ice and spikes within an AoE but only the spikes do any notable damage if you get hit. You can simply avoid the attack, jump in the AoE and use your swords to attack him while standing on the icy patch without getting much damage.

Geirröðr is weak to fire damage so use classes that have fire attacks. Ranger is quite effective against this boss.

And that’s pretty much all you need to know on how to beat Geirröðr. Need more help? See Tips and Tricks, classes explained.