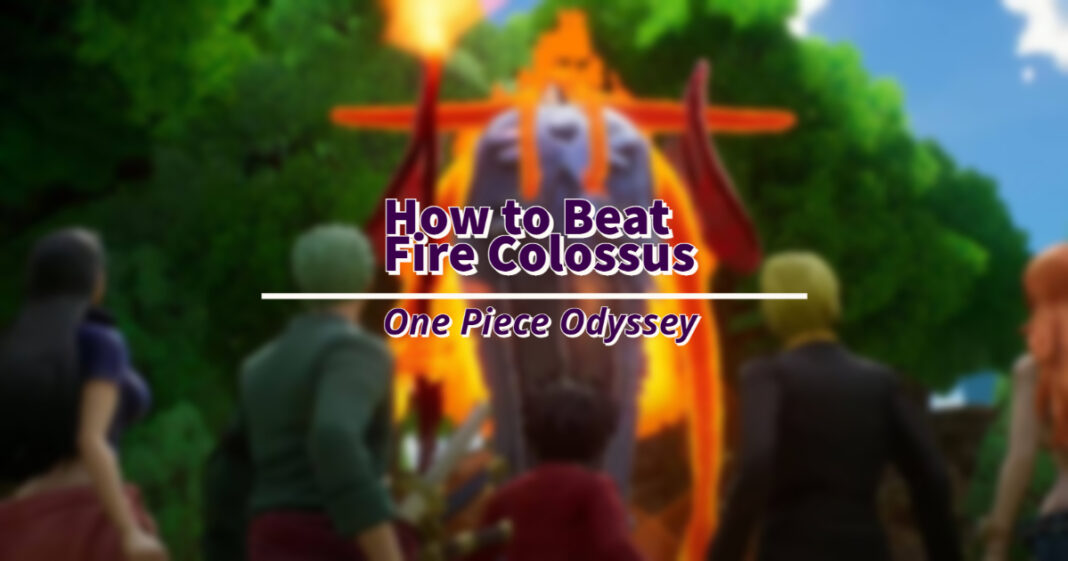 One Piece Odyssey’s plot starts with the straw hat crew scattered across Waford Island. As you traverse this game, your mission is to reunite the characters. Along your journey, you’ll face several bosses – one of them being Fire Colossus. In this guide, I’ll tell you how to beat the Fire Colossus in One Piece Odyssey.

Where To Find Fire Colossus

In Chapter 1: Island of Storms, players will face the Fire Colossus early in their gameplay. When provoked, this boss transforms from a harmless-looking bell into an enormous foe with arms and legs. A captivating sight awaits you when you discover the Fire Colossus in the southern woodlands of Waford Island.

How To Beat The Fire Colossus

As you advance through the game, your mission will be to locate Nami and reunite her with the Straw Hat Crew. Unfortunately, you’ll see Nami with the colossal orangutan Del Kong – your first boss in the game. Rescue Nami from this menacing creature. Participating in a fight will give you an in-depth insight into the fighting mechanics and how to enhance your speed. After you emerge victorious from your battle with the Del Kong, prepare yourself to take on Fire Colossus.

Fire Colossus, a powerful elemental boss, wields an immense fire torch in one hand and unleashes it against its foes. This intimidating figure utilizes the flame during a battle with dangerous efficiency. As its name suggests, the Fire Colossus brings forth potent power damage and grants your squad members fire-based destruction.

There are Fire Colossus two main and one final attack:

When taking on the Fire Colossus, your optimal team will be Luffy, Zorro, and Robin for attacking, with Tony Tony Chopper as a healer to keep your party members going. Robin’s Ochenta Fleurs Cuatro Mano Shock, Zoro’s Rashomon attack, and Gum-Gum Bazooka skill, when used together on the Boss, can quickly deal a staggering amount of damage.

When Fire Colossus unleashes his ultimate assault, Nami’s Thief skill is a reliable option for countering it. This ability grants you the ability to steal healing items in battle, securing your triumph. Thanks to Tony Tony Chopper’s healing power, your team will be in top health condition, and Nami’s healing items will act as a buffer.

In One Piece Odyssey, Fire Colossus presents an exhilarating two-phase fight. Once you reduce his health levels to nothing, a cutscene will play, and he’ll restore himself and return for another go – providing twice the challenge.

During phase two of the battle, you can employ precisely the same strategy as in phase one to rapidly reduce Colossus’ health. Suddenly, amid battle, an unknown stranger appears to assess the strength of the Straw Hat Crew. A mystery man joins the fray without warning and is triggered by an unseen force. In this well-matched duel, the Fire Colossus unleashed his ultimate attack on the mysterious man. However, to everyone’s surprise, the mysterious man could effortlessly deflect it right back at him, which ultimately caused his death and ended the fight instantly.

That’s all you need to know about how to beat the Fire Colossus in One Piece Odyssey. I hope you found this helpful and can easily take down this formidable foe. Need more help with One Piece Odyssey? Here are some guides you might like: