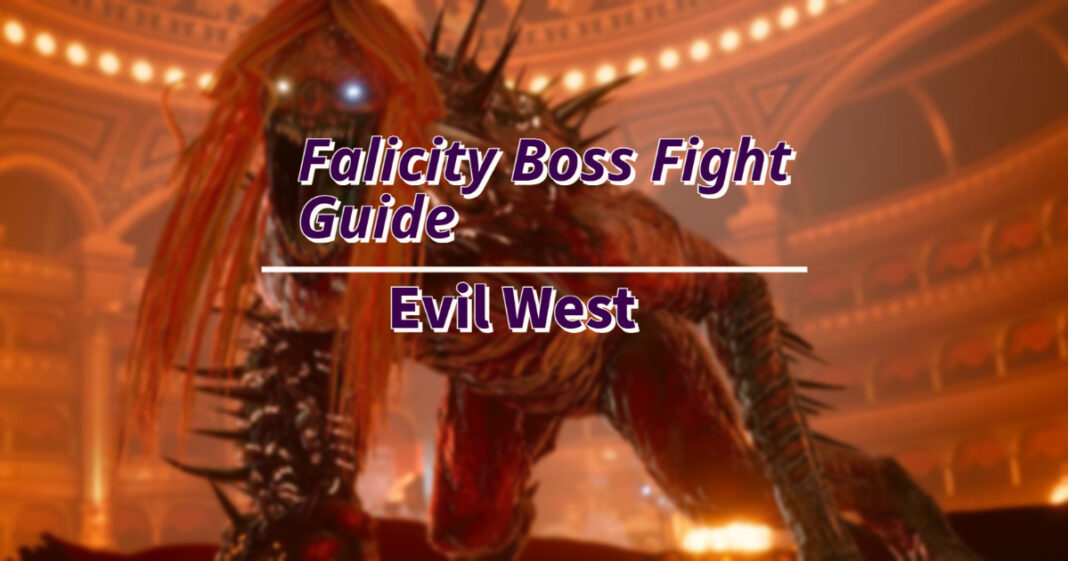 It’s time to face the fourth and final boss of Evil West, Felicity, who will reveal her true identity at Level 16: The Grand Finale. The battle with this boss is divided into three phases, each becoming more intense as you progress. The best strategy for this battle is to play defensively to ensure that nothing can stop you from winning. I’ll provide tips on defeating Felicity in Evil West in this guide.

How to Beat Felicity

Felicity’s attacks will vary depending on the phase of the battle, but in general, it’s important to stay on the defensive and avoid taking unnecessary risks. Use your weapons and abilities wisely, and anticipate Felicity’s moves to counter them effectively. With focus and determination, you can emerge victorious in this showdown.

When you start the battle with Felicity, there are a few things you should keep in mind to help you emerge victorious. To land effective hits on your enemy, use the Supercharge mode and follow it up with 6 punches. Afterward, use the Crippling Rod and Explosive Bundle while Felicity is stunned. Mixing in a combination of melee attacks and explosives will deal a decent amount of damage. To earn 1/4 of Felicity’s health, use shotgun blasts to attack.

Felicity may surprise you during the battle with her attacking pattern, so be prepared for anything. Remember that this female boss is an expert in melee attacks with deceptive timing. After performing a melee attack, she may use a slam that affects the battlefield. To counter this, use melee attacks and the X-bow.

When you see Felicity jump in the air, be ready to dodge. Another dangerous attack from Felicity is the dash attack, which is not a regular dash but a long-ranged attack that leaves a fire trail. Be on the lookout for Felicity stomping before running, as this signifies that you must jump to the side to avoid the attack. Stay alert and use your skills and abilities to defeat Felicity in this showdown.

As the battle with Felicity continues into phase 1, she will eventually use a powerful shockwave attack. This involves her punching the ground repeatedly, causing a beam of energy to come toward you. During this attack, she will reveal a weak point you can target using your X-bow. It’s essential to take advantage of this opportunity to do as much damage as possible, as the weak point will only be exposed for a short time. Be prepared to dodge the beam of energy and aim for the weak point to maximize your chances of success.”

During the second phase of the battle with Felicity, she will transform into a larger version of herself, increasing her range and damage capabilities. She will start the phase by using her dash attack, which involves her charging toward you multiple times. While this attack can be brutal to avoid, you will notice that she needs to pause and recharge after each dash. This presents an opportunity for you to attack her with your weapons.

Another attack to watch out for is her slamming attack, which involves her jumping and slamming down onto the ground. To avoid this attack, you will need to position yourself behind her. As the phase continues, Felicity will use these two attacks repeatedly, so be prepared to dodge and counter-attack as needed.

To effectively defeat the boss, you should stay in the battle and wait until the Crippling Rod and Explosive Bundle have cooled down. Once they are ready to use again, enter Supercharge mode and attack the boss with all your available moves. After causing a significant amount of damage, switch to a defensive strategy.

To protect yourself during the boss’s attack, use the Felicity to jump over the wall and create a burning circle, indicating where the rocks will fall. When the boss climbs the wall, you will have the opportunity to attack her three weak points.

Be aware that this strategy will only work once, as the boss will not be stunned if you try it again and will instead perform a slam attack. After successfully hitting the weak points, the boss will drop an item you can collect and use to enter Supercharge mode once more, allowing you to deal additional damage.

The third and final phase of the battle with Felicity is going to be the toughest. She will use all the attacks you have seen in the previous phases and more, so be prepared. Felicity will start by climbing the wall and throwing rocks, followed by a shockwave that will reveal her weak point, which you should try to target to interrupt her. She will then use a giant slam, which you need to dodge, or you risk getting killed.

For a counter-attack, use the Crippling Rod and your punches combo. Let the Rentier Gatling cool down and then use it to deal large damage. In other words, save some energy for a Supercharge and use it along with the Crippling Rod to stun Felicity; use a combo to deal a high amount of damage. Finally, throw an Explosive Bundle to deplete most of her health.

“If you have an upgraded Cocoon, you can ignore Felicity’s attacks for a limited time. While waiting for your Supercharge to be ready, play defensively. When it’s ready, hit her again. When Felicity’s health is down to about 5%, she won’t be able to do much, so take advantage and use melee attacks to finish her off and claim your victory. That’s all you need to know about beating Falicity in Evil West.”