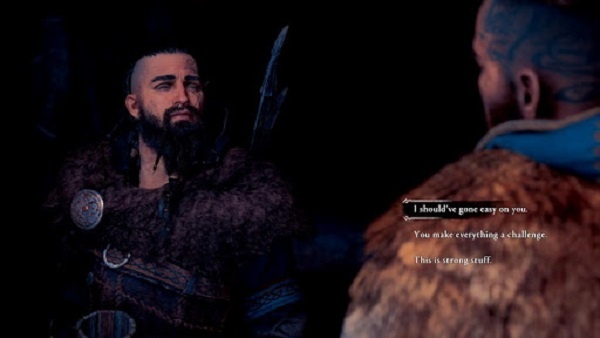 During “A Brewing Storm” the main mission of Assassin’s Creed Valhalla you will come face to face with Dag. No matter which dialogue option you choose when speaking to dag he won’t back down from this fight. In this boss fight guide, we will explain how to beat Dag in Assassin’s Creed Valhalla. Moreover, the Dag boss fight is in fact one of the Sigurd Strikes so making the best choice at this point means it counts toward the ending of Valhalla.

Dag enters the fight with a shield and axe. To beat Dag in Assassin’s Creed Valhalla you need to damage his weak points. His weak points are on his shield hold the hand, left knee, and right shoulder. Use the bow to target his weak points and bring down his stamina bar.

Once the stamina bar comes down you can easily land a devastating R3/RS attack to deal a great amount of damage to Dag. However, make sure not to spam attacks as it that can leave you vulnerable to incoming damage.

Instead of being aggressive, focus on parrying his attacks to open him up for hits. Time your dodge perfectly to slow down time and land a couple of powerful hits on Dag.

When a third of his health goes Dag will drop the shields and dual-wield axes. Nothing much changes so your plan should remain the same. But he will try to hit you twice as much now. Simply block, parry, and counter-attack to win the boss fight.

After you beat Dag you will have a key story decision at your hands. You can give Dag his axe back or deny him his weapon. You should give him the axe back but the choices it up to you. Read our endings guide to know more.