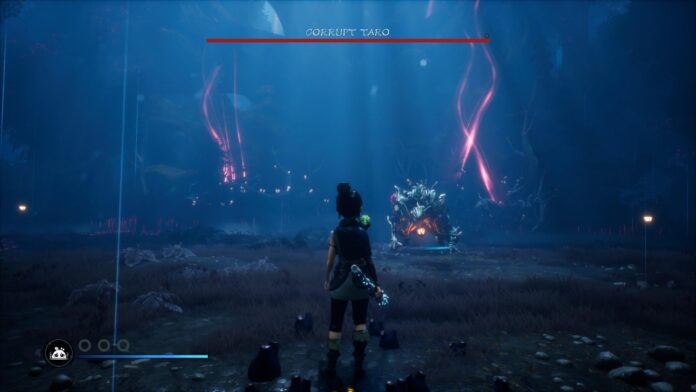 For a better part of the boss fight, Corrupt Taro uses a sword. It has multiple types of attacks so let’s start by discussing its attack types and how to counter them.

Corrupt Taro’s attacks pay feel very random at times but this is because he mixes it up very often based on what you are doing. Still, there are only a handful of attacks it uses that can be avoided with good timing of your dodge and jump-away moves.

First, it uses a three-strine slash move if you get too close to it. It happens with you are close and landing a few hits and it attacks in retaliation for that. Jumping away and running a few steps in opposite direction helps you avoid being hit.

Getting too close for too long will also force Corrupt Taro to use his energy blast. Corrupt Taro can release a wave of energy from his core that can deal a lot of damage. The move is projected by a pink symbol appearing on his chest. As soon as you see it, run and jump in the opposite direction immediately.

Another attacking move is when Corrupt Taro lunges toward you to perform and single-slash attack. You will have plenty of time to jump away to your right or left to avoid the move.

Corrupt Taro will often jump back and then jump a large distance toward you to perform multiple slash attacks, somewhere between 3 to 4.

When Corrupt Taro is half HP, it will drop the sword and use its claws and tail to attack you. The attack pattern is pretty similar to before. Corrupt Taro will pounce on you and use 2-3 slash attacks.

This time it will also run around the arena and often pounce on you as well from a distance. You can see it coming so jump to the left or right to avoid this attack.

Now that you know how to avoid being hit, it is time to learn how to effectively deal damage. The entire boss fight can be won if you simply keep stunning Corrupt Taro and then going in to land a few hits.

When at a distance, use your bow to target the lantern hanging from its neck. The lantern will explode and stun Corrupt Taro which gives you a chance to get it and land a few hits before you must jump away.

Target hit with your bow from a distance until the lantern respawns and then repeat the process. The fight takes roughly 5-6 minutes and following this method you would be able to beat Corrupt Taro quite easily.