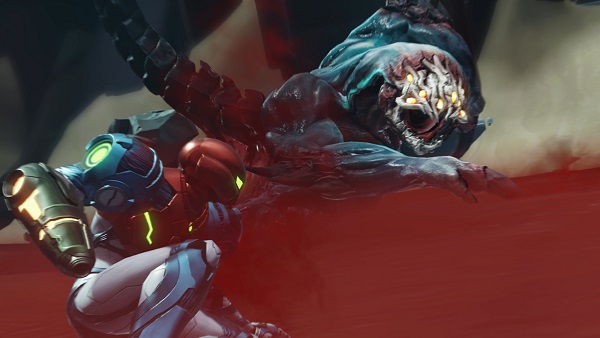 One of the boss fights you come across in Metroid Drea is against Corpius. This boss is a creepy creature that would remind you of the monster from Aliens movies. It uses its sharp tail to attack you or often pounces. In this guide, we will discuss everything you need to know on how to beat Corpius in Metroid Dread.

The attack it uses the most is the tail whip attack. However, you can avoid being hit if you can spot the telegraph. Corpius’ tail will coil backward for a moment before it whips in your direction. This gives you an opportunity to slide dodge ahead of the tail.

If you successfully avoided the attack, you can then land a few hits because the boss will be vulnerable for a few seconds. Use your missiles to target its head for maximum damage.

If you’re stuck on the other side of its head wasting your missiles isn’t a good idea. Use a Charged Shot when the tail is taken out. The boss may alternate between ducking and raising its head.

In such a situation, you can crouch and fire or use the targeting system if you get the chance. It should be noted that Charge Shots and Missles have the most impact on its head so that should always be your primary target.

Corpius spits out acid packets that lung at you so watch out for them.

If you end up using all of your missiles, keep using the Charge Beam at its head until the boss cloaks itself. During this phase, you will get some of your missiles back but you can’t see its head.

The best way to go is to target the light source near its stinger. Use the missiles to hit the light source. Shoot multiple missiles at it in rapid succession. Use Charge Beam and Missles in between its tail strikes because it’s vulnerable.

During the third phase of the boss fight, Corpius will be able to attack you from behind. You’ll need to slide under its exposed rib cage and target the vulnerable area. You’ll need to complete a quick time event or take a lot of damage.

Other than that, keep focusing on its head until toxic gas comes out of its maw. Jump to reach the Magnet Tail and hold on until the gas is gone.