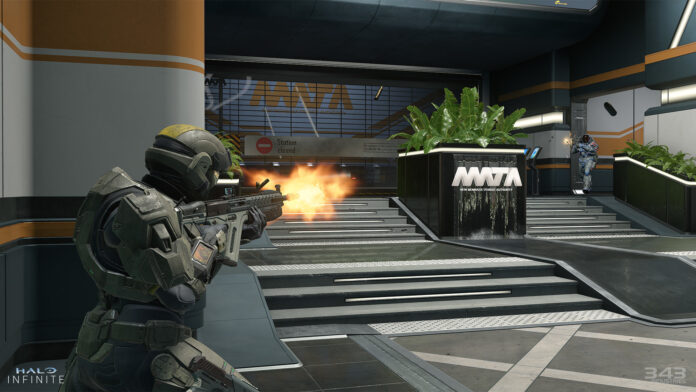 Chak ‘Lok is one of the first bosses you will encounter in Halo Infinite. This boss is difficult to defeat because of his cloaking nature and aggressive fighting style. You should make sure that you have the best possible gears and upgrades before going into this fight. This guide will explain how you can defeat Chal ‘Lok in Halo Infinite.

You can use Shock Coils to stun him for a short time, Threat Sensors to let you know where Chak ‘Lok is when cloaked, and use grapple shot to reveal Chak ‘Lok’s position. To wipe his shield out, you can use weapons and grenades of the pulse category. The best way of lowering his health is to use kinetic weapons and grenades.

Chak ‘Lok has a pretty nice setup of attacks. Although, you need to specifically watch for an attack in which he jumps. He pulls out the sword and comes close to you to hit you. You need to dodge this attack at all costs, as it’d take one or two hits to finish you off with this attack. Just like you did with Termonius, use Grapplehsot to play in an evasive manner.

The first thing that you need to do after the fight has started is to deploy your threat sensors. You can select threat sensors by pressing “1” on your keyboard. This sensor will reveal his location, then use your Grappleshot to decrease the distance if he is detected far away from you. After this, you need to rain down hell on Chak ‘Lok with your pulse weapons and explosive charges.

You will notice some blue electrical coils on the walls in the room. You can shoot them when Chak ‘Lok is near any of them to stun him. That’d make him vulnerable to your attacks. You need to deal him heavy damage while he is stunned. Use your pulse weapons and explosives to deal the maximum amount of damage.

Now, you have probably lowered his all shields, so just keep on using kinetic and pulse weapons to finish him off quickly. However, you will be switching a lot between Threat Sensor and Grappleshot in this fight. So, just be mechanically prepared to win this battle.

This is everything that you need to know about defeating Chak ‘Lok in Halo Infinite. Need more help? See How to Get Abbey Lime Skin, How to Get Bassus, How to Fast Travel.