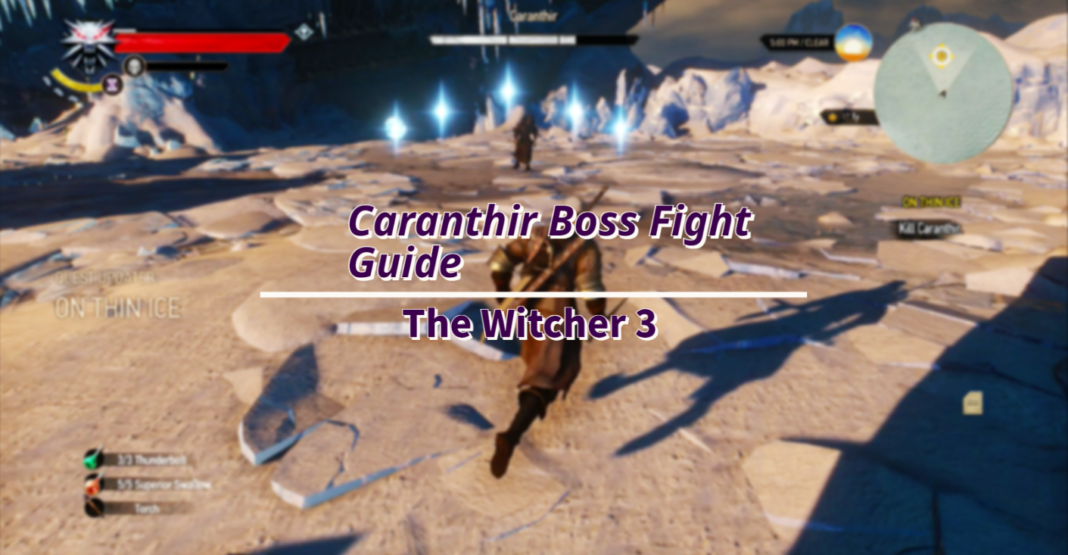 The Witcher 3: Wild Hunt is an electrifying and demanding game presenting formidable bosses that test your skills. While some bosses can be relatively easy to defeat, Caranthir Ar-Feiniel stands out as a particularly tough boss. He is a member of the Wild Hunt, and defeating him requires strength and smarts. As the navigator of the Wild Hunt, Caranthir commands mastery over teleportation. However, tragically he meets his downfall in “On Thin Ice,” an infamously doomed main quest. In this guide, I’ll tell you how to beat the Caranthir in The Witcher 3.

Where To Find Caranthir in The Witcher 3 (Location)

As you journey towards the Nilfgaardian Camp at Merlin Coast in the quest “On Thin Ice,” be prepared to come across Caranthir. Upon wrapping up your conversation with Avallac’h, be prepared for a battle; the boss is coming after you. As you approach, Caranthir will leave Ciri unfrozen while freezing all else. After that, Ciri will join forces with your battle to care for any monsters on the sidelines.

How To Beat Caranthir Boss Fight

When challenging Caranthir in battle, you’ll find it is divided into two distinct phases. Initially, as Ciri, your task will be to keep him at bay; however, when transitioning back to Geralt for Phase 2, don’t expect a uniform assault pattern because, this time, it’s sure to vary.

When playing as Geralt and coming across the Caranthir, use your Slive Sword – its weakness. However, as it begins to employ magic attacks, a strategic solution is to deploy Dimeritium Bombs and stay as close to him as possible to interrupt his projectiles. Additionally, the Igni sign can be used effectively against this boss due to its vulnerability; it will not only remove the armor but also inflict damage.

Caranthir may resist oil-based weapons, but their elemental summoning can’t so you can use oil in the fight. Remember that they also possess teleporting and magical abilities, so it is wise to stay alert and prepared for any sudden dodge attack that might come from behind!

In the initial phase of this fight, you will be in an immobilized state as Ciri and facing Caranthir. However, Ciri has one extraordinary power – teleportation – which will be invaluable in this fight and might even give you the upper hand over your opponents. Instead of using magical powers in this stage, he will instead rely on his close combat skills and teleportation abilities against you.

As Ciri, you can attack Caranthir using your sword to deadly and effective results in phase 1. Avoid the Blink, as it will not provide any advantages here – instead, rely on your melee attacks which should be enough to inflict damage upon him. If you land a hit on him, quickly teleport away and allow Ciri’s HP to regenerate for maximum benefit.

When Caranthir’s health is depleted to a third of its entirety, Ciri will break the magical orb on his sword and trigger a cutscene. Unfortunately, this causes her immense strain, but she must quickly teleport for Geralt to be unfrozen and jump into battle–signaling the start of phase two!

As Caranthir enters Phase 2, his offensive tactics will become much more unpredictable. He will now utilize long-range magical attacks, which come in two varieties: the first is five lances stacked consecutively that are hurled towards you at an alarming speed – roll forward swiftly to avoid them and close in on him while doing so.

Tip: Frequently Use Quen to protect yourself against projectiles and post-teleportation attacks.

During the second attack, your adversary will fire three lances in succession – just like before. Don’t be intimidated by this move; you can easily dodge them with your swiftness as you did during the first attack. As soon as there is an opening, strike back using swords a few times and watch him teleport away to repeat his pattern.

As soon as Caranthir’s health drops to half, he will call out for assistance and summon Ice Elementals that act as armor. Use Igni or the Dancing Star Bomb to shatter his defense. Simultaneously apply Elementia Oil on your sword so you can quickly dispose of these creatures and focus entirely on Caranthir himself.

Tip: You don’t have to focus on the Elemental if you can bring him in the line of Caranthir’s projectiles.

When you have completed the summons, act swiftly to counterattack Caranthir using his teleport abilities. Once he is close to being defeated and only has a little HP remaining, an intense cutscene will ensue in which Geralt plunges his sword into Caranthir’s heart while he grabs your leg and teleports underwater.

With the Caranthir vanquished, Geralt triumphantly emerges from the depths of the sea. Then, after a brief respite to recoup his strength, he is ready for another confrontation – this time with Eredin, King of Wild Hunt himself.

That’s all you need to know about taking down Caranthir. So, arm yourself with Elemental Oil and Igni, stay alert for any unexpected teleportations and outmaneuver him through quick reflexes – you can make a name for yourself as one of the Witcher’s most fearsome opponents. Want to know more about The Witcher 3? Here are some guides you might like: