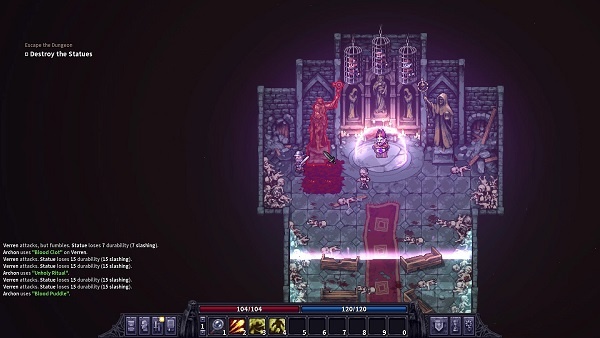 How to Beat Ascended Archon

One of the very first bosses you will come across in Stoneshard is Ascended Archon. It is an early boss but still, he can be quite challenging to beat, especially, for those who didn’t play the game in early access and are newcomers to the experience. Ascended Archon has powerful abilities and is a tough one to beat in Stoneshard.

Players must beat Ascended Archon to enter the full game and it has two stages which boost the difficulty right away. The first phase of the fight pits you against “The Archon,” the second phase will have you face “Ascended Archon.”

The fight starts with Archon after you have a few words with him. Nothing special just your usual hero vs villain banter back and forth. He will swear to kill you and you will be the one to actually kill him thanks to our boss guide. The boss fight starts now but you won’t be able to cause any damage to Archon. The boss has a shield up that protects him from you. Your battle is with two statues on either side of Archon. Archon will unleash some zombies on you that you must takedown.

The left statue has two abilities, Blood Puddle and Blood Clot. Blood Puddle is an ability to mark an area and drops a puddle of boiling blood on it. Yes, you will be attacked with boiling blood! The puddle lasts for two turns. Meanwhile, Blood Clot throws a clot of blood at you.

The right statue also has two abilities, Summon Zombies and Unholy Ritual.  The first one is pretty self-explanatory while the ability, Unholy Ritual is able to restore 50% of Max HP of all zombies and grants them 50% damage.

The best way to go about phase 1 is to take down the left statue first. Make sure you avoid the blood pools, you will have one round to move away from the attack so that’s a good thing. Kill the zombies whenever needed as they can overwhelm you and distract from the main target. Once you are able to take down the left statue, target the right statue which is the easiest one to take down. Just don’t let the zombies overwhelm you.

Once you are able to destroy both towers, Stoneshard ‘s Ascended Archon boss fight begins. This is the real boss fight phase. The Ascended Archon Stoneshard boss is fast and can deal a lot of damage to the player. It can also heal itself and has a total of five different abilities for you to deal with.

Ascended Archon boss fight revolves around the player making sure you avoid its aforementioned abilities. The best way to beat Ascended Archon is to stun it which is done by using its own ability against him. You need to bait him to charge you with its Bestial Charge.  Have your back to the wall when it charges you and move out of the way. This will cause Archon to hit the wall and stun itself for  2 turns.

The most dangerous ability of this boss is the Phantom Bats that does a great amount of damage. Sometimes you won’t be able to avoid this attack at all. You need to time it just right to jump out of the way and shift to another tile.