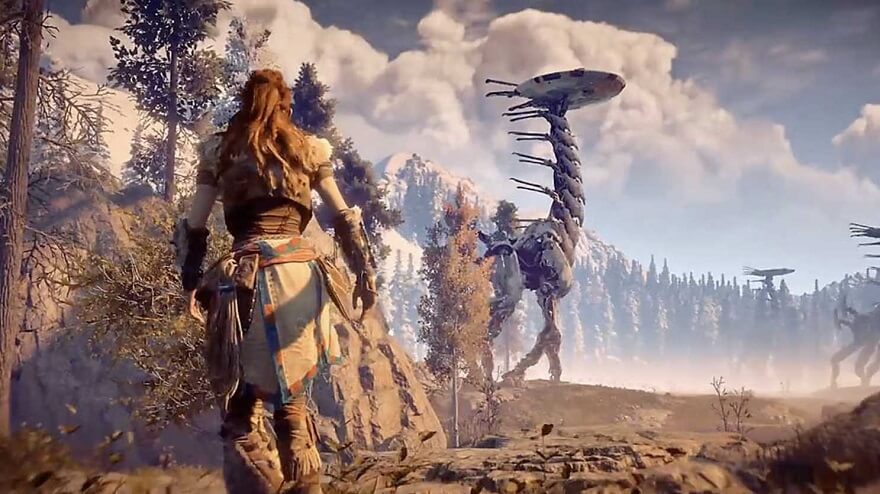 There is no doubt that Horizon Zero Dawn is one of the best looking games on the PlayStation 4. With its PC release, the game looks even better. However, in terms of performance, things aren’t top-notch. Meaning, the game is facing performance issues and here we will discuss each of the game’s graphical settings and will also recommend the best options for each setting.

The following are the different settings that you can tweak when playing Horizon Zero Dawn PC. Also, update your GPU driver to the latest version.

Horizon Zero Dawn has a weird glitch with v-sync enabled. The game constantly stutters after regular intervals. I recommend to disable the in-game v-sync and force it through the GPU driver.

Recommended: Force it through GPU driver

The “Textures” settings control how far the high-resolution textures are rendered. This setting is rather unusual, dropping from Ultra to Medium has no noticeable difference in graphical quality.

Not only that, Ultra, High, and Medium settings use the same amount of VRAM and the performance is also similar. Even dropping to Low will only give around 2% of an increase in performance.

I can’t really recommend anything here, it depends on the players themselves. The higher the setting the sharper the textures will be at a distance. The Medium setting is just fine.

The “Anisotropic Filter” setting in Horizon Zero Dawn doesn’t work as it should. Meaning it has no impact on the anisotropic filtering when maxes out of turned down. I recommend forcing 16x Anisotropic Filtering through the GPU driver.

The recommended setting here is “Ultra” as Horizon Zero Dawn has a lot of further views and lowering the setting will increase pop-ins. Besides, the performance cost compared to High is very minimal.

The “Shadows” setting only controls the resolution of the shadow maps close to the camera. It has no impact on shadows at a distance not it increases the distance at which high-res shadows are rendered.

Also, it has minimal impact on self-shadowing i.e Aloy’s shadow. The recommended setting for this graphical options in High. Compared to Ultra, High will save players 5% of performance. But, players can drop it to Medium is they want more FPS and it’s not even that bad looking.

“Reflections” is one of the most expensive graphical settings in Horizon Zero Dawn. This setting basically controls the resolution of SSR(Screen Space Reflections). High setting results in the reflections being displayed at full resolution. Anything below High will reduce the reflection resolution.

The recommended setting is Medium since the game doesn’t have a lot of reflective surfaces which means the impact on quality will not be noticeable. Also, compared to High, Medium reflections will save you around 15% performance.

“Clouds” is another one of the most expensive graphical settings in the game. This one not only impacts performance but also, the look of the game. “Clouds” setting controls the resolution of the volumetric clouds.

The recommended setting for this one is “High” because the “Medium” setting looks chunkier and low resolution. The “Ultra” setting will obviously improve it significantly but the performance cost is too much. Dropping from Ultra to High will save players around 25% of performance. High is the best option here because it’ll save performance and clouds won’t look low resolution but, you can drop it to “Medium” if you want more FPS.

For “Anti-Aliasing” Horizon Zero Dawn gives players the options of FXAA, TAA, and SMAA. TAA is the recommended setting here. The other Anti-Aliasing options will still create jagged edges as the player moves the camera.

However, TAA does have its flaws like ghosting and softening the image quality a bit. But, TAA is the best option because it only rids the entire image of the aliased edges but also has a small performance cost.

This is a bit of a weird graphical option as it not works as it is supposed to. Turning this setting up somehow makes the SSAO effect weak and transparent which doesn’t sit well with the game’s indirect lighting. The characters in shadows glow a lot more on Ultra compared to Medium.

I recommend Medium setting but, players can turn it up to Ultra if they prefer it. Using the “Medium” setting, players will save 3% performance over Ultra.

This is a bit of an odd one but we noticed better performance of up to 10% using the exclusive fullscreen setting. This might be something that you could use to your advantage if you are looking for a major boost in performance.

How To Boost Performance, Get 60 FPS

Tweaking the in-game graphical settings isn’t enough to get the most performance. There are a few settings that players can tweak in Nvidia Control Panel that can provide players with a significant boost to performance like going above 60 FPS.

Apply these settings and players will notice an improvement in Horizon Zero Dawn’s PC performance.

In case players want to squeeze more out of their GPU, hen set Vertical Syn to “Fast”. This might not give everyone an FPS boost but it can boost the game’s performance significantly if players have decent CPU and GPU.

Fast Sync allows the GPU to act in a similar manner as G.sync or Freesync. It allows the GPU to render as many frames as it can for the game, like the vertical is disabled, but there won’t be any screen tearing.

Also, Fast sync won’t work if players have enabled the “Max Frame rate”. Furthermore, the GPU will waste the frames in excess of the display’s refresh rate. If the display supports 60 Hz and the games in rendering at 80 FPS, the GPU will waste the excess of 20 FPS and will only display 60 FPS. Fast sync is best for monitors with a higher refresh rate.

If players intend to lock Horizon Zero Dawn at 30 FPS on PC then don’t use the in-game FPS slider. Instead, do it through the driver. Go to the Nvidia Control Panel > Manage 3D Settings > Program Settings > select Horizon Zero Dawn. Enable the “Max Frame rate” and set the value to 30.

The reason why I recommend it through the driver is that the in-game FPS slider will lock the game at 29 FPS with severe frame pacing issues.