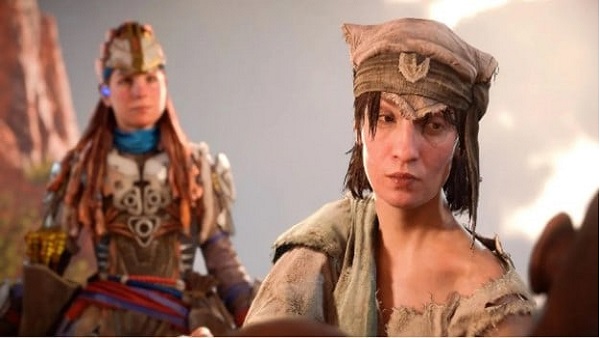 In this walkthrough, you will have information on how to start this side quest, The twilight, its required level, and the points earned after completing it. This side quest in Horizon Forbidden West is in chainscarpe, the first outpost in Daunt.

Upon arrival at chainscrape, Aloy meets Petra and has a conversation over a cup of tea. Both discuss the aftermath of the Battle of Alight, Petra shares information regarding Shadow Carja, staying in the mountains of chainscrape. Petra tells her about a salvage: a stormbid heart that gives a considerable amount of scrape but the path to this salvage is blocked. Aloy plays the role of a moderator to resolve the matter with the settlers to clear the way.

Before heading towards the Twilight camp, Aloy can chat with Tolland about this matter. Still, Tolland is of the point that he is the first rightful owner of the Stormbird Heart because he shot that down from the sky, so he refuses to negotiate on this matter.

The camp is situated in the southwest direction of chainscrape towards the mountains, where Aloy will hear the noise of the ongoing war against scroungers and burrowers. Kill these scroungers and burrowers to proceed towards the twilight camp. Oseram, the companion of Tolland, is also fighting except machines. Aloy informs the leader Lokasha about Tolland and his men at the base, but lokasha says he can’t abandon the camp because their head Savohar is not here right now because he has gone for rumination hasn’t returned for three days. Lokasha shows concerns about his leader, so aloy suggests that she will go there to find him.

Location of Sovahar in Mountains

After finishing the conversation with Lokasha, enter the camp and proceed towards the left, where you will find a broken ladder and a series of others. The game interface will instruct you how to climb and jump through this straight path. Along the way, aloy will also face more scroungers and burrowers. You can select to fight them or avoid them by sneaking.
In this way, Aloy will see blood trails, follow this blood trail, and you will reach Sovahar, who is injured. Aloy chats with him and offers him help which he refuses. So, Aloy leaves him to search for the stormbird heart.

How to Get Stormbird Heart

Move towards the right of sovahar, and you will see a grapple point, climb down using it where you will find another grapple point. By using it, you will reach a cliff climb. At the top, you will find a tower on which a stormbird is; search it to gain its heart. Just beside the stormbird, ascend down the building and return to sovahar.

Return to the camp by following the same path through which you reached Sovahar, move towards the left of him and climb down to the land at the base, where you will listen to a conversation between Tolland and Lokasha. The game interface will give you three choices to resolve the matter.