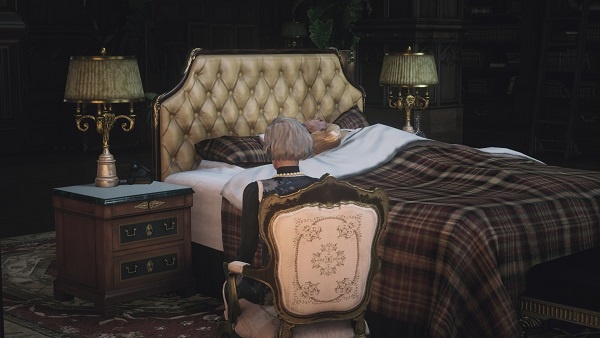 Agent 47 brings out his inner detective in this Dartmoor Story Mission. To give you a little background of this mission, there is a murder in the manor, and Carlisle family has called a private detective to investigate. Use this fact as your way into the manor and get access to pretty much the entire manor.

To start “Means, Motive, and Opportunity” you need to listen to the private detective as he tries to entire the manor yard. Use the nearby bushes to sneak into the manor yourself. Inside, you will get a few opportunities to take him down before he meets Alexa Carlisle. The best opportunity to knock him comes in the eastern corridor near the staff area.

Use his disguise and meet with the Butler, Mr. Fernsby, and is going to take you to Alexa Carlisle, your main target for this level. After speaking with Alexa and getting initial information about what happened, you will be taken to the crime scene, the bedroom of Zachary Carlisle, who allegedly committed suicide. However. his sister Alexa Carlisle doesn’t believe it’s suicide and leans more toward murder.

Once inside Zachary’s room scan for clues on his body, computer, bottles of alcohol, suicide note, mansion floor plan, and button for the hidden room behind the bookcase.

After completing your investigation in the bedroom, speak with the Butler once again and he’ll ask you to further investigate the matter. You will then have to speak with every important character in Thornbridge Manor. You can easily explore the manor, every nook and cranny to find out more about the murder of Zachary Carlisle. Make sure to use your camera to scan for clues; look for camera icons on the mini-map for possible clues locations.

Speak with everyone in the house and check their alibis. If their alibis check out, you can rule them out as suspects.

Go to the greenhouse and locate the crate with the crowbar. Use the crowbar to break into the Butler’s room. There is plenty of evidence inside that points to Mr.Fernsby’s involvement in the murder of Zachary Carlisle. Pick up the old letter, the master key, and the poison vial.

You have enough evidence against the butler so you can accuse him of the crime. However, he was just a pawn so the real killer is someone else. The real killer is Emma Carlisle and the option to accuse her becomes available after you investigate her room, and check her alibi.

With the evidence in hand speak with Alexa Carlisle and share your findings. You will then have two options; choose money or the case file.

If you choose to take the case file, Alexa allows you to take the document from the safe but there are other ways to get it though. Anyways, Alexa Carlisle will then go to her balcony alone which gives you a chance to kill her unnoticed before you leave.