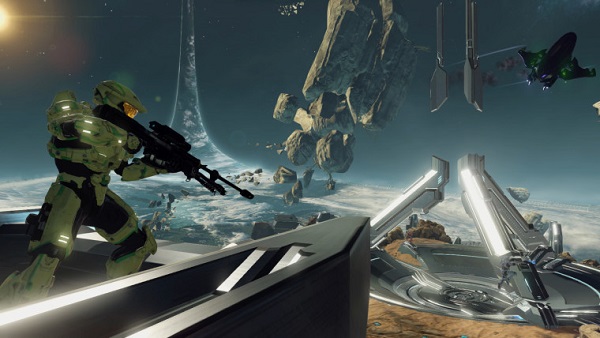 Skulls are a collectible type in Halo 2 and Halo 2 Anniversary Edition on PC that is out now as part of the Master Chief Collection. Halo 2 is also the very first game in the franchise where we go to search for the hidden locations of the Legendary Skulls. Speaking of hidden locations, in our guide today we will revel where you can find all of the Halo 2 Anniversary PC Skulls.

Most of the skulls you find in Halo 2 are found at various locations in the game and only available on the legendary difficulty. In Halo 2 these skulls give you special modifiers but in the Anniversary Edition, they are nothing more than a way to unlock achievements. Skull abilities are available from the start and can be turned on before you start a mission. While most of them are found in the legendary mode there are some exceptions to this rule which we will go through as well.

The Whuppopotamus Skull makes the AI harder to beat as it becomes more accurate, much better at spotting camouflage, shadows, footsteps, and even the sound of reloading and weapon swaps. Master Chief can find this one in The Armory mission in Halo 2 Legendary mode. Right before you are about to enter the elevator with Sergeant Johnson, you should wait outside the elevator for close to 5 minutes until he says “Would it help if I say please?” Now enter the elevator and wait for the tram ride to begin in the next section. When inside the tram, face towards the inside of the building and press up against the glass door, wait for the tram to reach a stack of crates near the end of the ride to gran the skull off of the crates.

This skull makes life harder for Halo the Master Chief Collection players. The skull’s effect will boost most enemies to their highest rank. You can find the Legendary Skull in the Cairo Station Mission, which is the first mission from Halo 2. We have explained how to find the skull in our Cairo Station walkthrough guide.

The effect of this skull is interesting, to say the least as your weapon and HUD become invisible. The only exception to this is the Energy Sword. When you start the main mission, Outskirts, go through the door and kill an enemy Grunt before backtracking, and above the first door you cam in there is a light. Use the Crouch Jump Twice to reach the roof. Look for the space between the two buildings and jump into it, inside you will find the Blind Skull and some other items.

I Would Have Been Your Daddy Skull – Outskirts

Once you have this skull rare combat dialogue becomes more common in Halo 2. The problem with this skull is that it has a random chance of spawning which makes it hard to find. But there is a method to it which you can follow. In the Outskirts mission, there is an alley where Jackel Snipers spawn for the first time in Halo 2. Make sure you enter the alley on foot otherwise the skull may not spawn at all. The skull is in the room that has 7 posters.

From the starting point of the Outskirts mission, go into the first hallway and look above to the two lights on both sides of the hallway. Jump on one of the lights and then use the crouch jump to reach the higher platform. From there you can turn around the walk on the ledge to the right. There is another platform across the ledge, jump on it, and use the Grenade Jump or Double Jump to reach the higher level. There should be a roof to your left, jump on it and go right, down the alley where you can jump on the higher roof. Go to the other side of the roof and jump down the street. Head right to reach an open area where you can avoid the Jackel fire by hiding behind a big truck. Once the enemies are killed by your allies you can go to the ramp but don’t go past the top of the ramp. Wait for the checkpoint, save the game, and quit the game. The checkpoint is before the Jackal snipers are spawned in the alley which is exactly when Halo 2 calculates the chance of spawning the skull. You keep reloading this checkpoint if the skull doesn’t spawn.

Keep in mind that Halo 2 has an auto-checkpoint a little further ahead and you need to avoid this checkpoint. Keep meleeing enemies in the next section and as long as you keep doing it the game won’t create a checkpoint. If it does you turn off the console and reload your manually saved checkpoint.

Head through the alley and you should be able to spot a dumpster to your right.  Climb the dumpster and reach the roof. Now get on the pipes attached to the wall and climb the platform, lead the roof across from the alley. Move diagonally to the right and  reach the roof past the bridge and head left. You should be able to see a balcony across the alley with a doorway. Remembers to keep meleeing until this exact point. Now you can stop meleeing and enter the doorway and look at the ground to your right. Wait for ten seconds and a checkpoint will trigger, quit the game without saving and try again. Now restart the game and go back to the room with the skull. If you did it correctly the room will have the skull, when you grab it you will be transported back to the alley. You will have to fight Elites with a Plasma  Pistol Alone.

Both allies and enemies will throw more grenades and also drop more grenades upon death. The Catch Skull is found in the Metropolis level of Halo 2 Legendary Difficulty. When you exit the sewers there is an area with 2 ghosts. Deal with the enemies and go to the middle where an arc leads to the building. Grenade jump by the building to start climbing it. Reach the top and go left, hug the wall around the structure and you will find the Catch Skull.

Headshots make enemies explode if you find this skull and toggle the special effect. When you get the banshee fly down where you see a large beamlike structure that runs from the arm of the station. There are 3 cylinders below this structure and light shooting out of the cylinders. Under the station, there are some machines and a platform with 6 Grunts and a skull in the middle.

The weapons you pick up only have half ammo once you manage to find the Famine Skull in the Oracle mission. You need to be playing on legendary. Take the long elevator ride to reach a room where some enemies are fighting each other. Break the glass to get to them Use the crouch jump on the opposite side of where you came down and you should be able to find the Famine Skull.

This skull is only found on the Legendary mode and gives Master Chief Collection players a cloak instead of a flashlight. You can cloak for 5 seconds. To find the envy skull you need to come out of the big building and see the turret, 5/6 shield up on the wall to the left. At the far end of this wall, there is a block and door. The blocked door has two plasma swords. There is also a door block by a rock but you can jump on the rock and onto the ledge above the blocked doorway. Now move left and grab another ledge. Use the Grenade Jump up to the location of Two Elites. You will find the Envy skull here.

You can get the Assassins Skull on any difficulty level with ease. It will cloak all enemies in Halo 2 Anniversary permanently. Once you are off the Gondola you will go into the structure and see a big block of stone that you can use to climb and grab a ledge leading to the Covenant turrets. Jump on another platform to the right side of the structure. Keep moving that you will find the next Skull here.