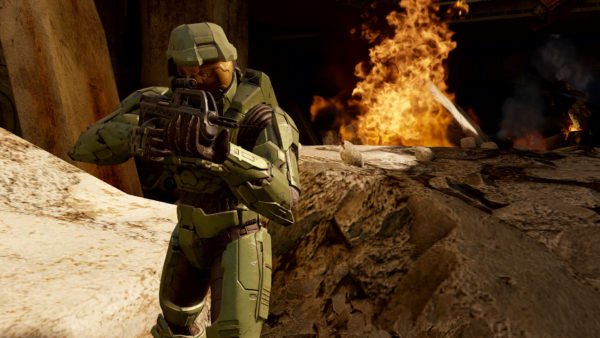 After much anticipated, Microsoft and 343i have released another member of the Halo franchise on PC, Halo 2 Anniversary. The game comes to PC with updated visuals as part of the Halo: The Master Chief Collection. In the game, you will encounter a ton of aliens as you play as the one and only Master Chief and while progressing your way through the story you will need to find some terminals. In this locations guide, we will reveal all the Terminal Locations from Halo 2 Anniversary.

Terminals are control panels you’ll find in spread across the map in the story mode. Finding all the terminal locations aren’t mandatory in Halo 2 but if you wish to get some background story details, terminals are where you get them.

Now let’s go into detail about how and where to find these terminals.

The first terminal is to the left side of the all of the armory where Master Guns checks Master Chief’s armor. After the 2nd Orbital Defense Platform takes down you can check this terminal. Go through the lower hallway to get yourself to the armor in Halo 2 Anniversary.

You break a glass to reach a two-story room to fight the Flood and Heretics after the elevator ride. The terminal is to the left side of the room behind a wall right after you dropdown.

Go in the burning building and follow the hallways to reach a room. When inside the room,  stay on the ground floor and keep on the wall under the exit to reach the terminal.

You can find the terminal in the final open area where you face the Phantom and Ghosts before you enter the tunnel that leads to the bridge. You will find it at the lower level, the right wall of the building where you met the Marines.

When you reach an outdoor area you should easily be able to spot this one in the distance. It is on the left side of the area. When you’re exiting this area, go past the door to find it.

There is a building where the Marines took refuge before you face the Scarab. Took on the left-back behind some crates in the first hallway. You reach the area after you take down some Wraiths and the Marine let you in the building.

You face some Elites, Hunters, Drones, and Jackal Snipers in the game after taking another big elevator ride to reach a large three-story room where the terminal is. Look for the terminal on the top level, left side behind the hologram.

Take the ghost down the flowing waterfall to enter an area that has a bridge and wraith in the distance. Head to the top of the bridge which connects to the door, you can search the terminal behind some pillars here.

Master Chief will find the terminal in a big room with two blue conveyor belts after you clear the hanger. Head down two hallways. You will find the location at the back wall of the platform on the right side.

Master Chief can search for this one in the first big platform with a skybox, the one that has no flood.

After you use the elevator and kill the alien threat in the area, end a room with a sword. What you search for is in this area to the left of the main entrance.

When you reach the section with prison cells, you can see another one on the ride side of the upper floor. You must take down the shield to access it.