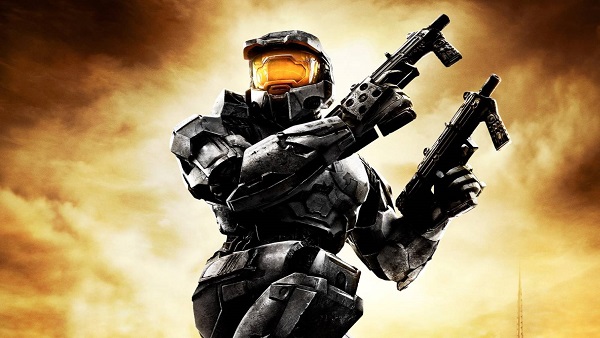 The first mission in Halo 2 Anniversary PC is divided into three sections. The first two sections are called The Heretic and The Armory, and they are nothing more than the tutorials. The game formally kicks off with the Cairo Station mission where you properly get control of the Master Chief and face a plethora of enemies as we kick off the story. There are some collectibles in this level as well so do check out our Halo 2 Anniversary PC terminal locations guide. In this guide though, we will go through the Halo 2 Anniversary PC The Cairo Station level completed on Legendary difficulty. Compared to the non-anniversary edition, the legendary difficulty is harder in Anniversary Edition PC which is released as part of the Master Chief Collection.

The Heretic is simply cinematic while The Armory takes you through the controls etc. Once Master Chief is done with the armory, follow the Sargent to the elevator and then tram to reach another cutscene.

How to Get the Legendary Skull: When you are supposed to enter the elevator behind the Sargent, don’t. Instead, wait for about 4 minutes for him to say “Would it help if I said please?” Now walk inside the elevator and reach the tram. When the tram starts to move to go to the corner to the left of the Sargent and be ready to grab the legendary skull as you pass through the next room. The skull is on top of the crate right before the tunnel.

After the tram ride, when the cutscene ends, make sure to follow the Marines down the staircase to pick up the Battle Rifle and SMG. There are more guns here so if you run out of ammo you can come back here to grab some more weapons. You will soon reach the recreation room and the Marines will take their position around the door at the end of the recreation room. The door will soon explode and a Swarm of enemies comes through it and the battle begins. Take all of them down and go through the exploded door to reach the next hall. You will find more Covenant enemies here, take them down and go up the stairs around the corner.

Once up the stairs enter the hangar where you will face more Covenant enemies. Go down to their level to take them down and soon you will see your ship explode in the distance and more enemies will come through. Now clear the hall and move ahead to the next room. In this room you will see a few Marines pinned down by a Covenant turret, rush the turret and take it down. If you run fast you will be able to avoid the fire. Keep an eye on the left hatch that spawns new enemies. Take down the Elites first with Plasma Pistol and SMG.

Once the Elites are down you should focus on the Grunts. When the area is cleared you will hear of a bomb on the ship. You need to follow the red arrow to reach the MAC storage and stand on top of the stairway. Master Chief will see some enemies below which are set for a grenade. Throw a grenade at them before starting to fire.

Go to the downstairs hall and after killing some Grunts keep moving to reach the next hall. You will enter the next room via a door and face some invisible Elites in the halls. The halls will take you to the next room where more Elites await the Master Chief, there is a shotgun in the middle of the room which comes in handy.

How to Find the Cairo Station Terminal: When you reach the armory where you started the mission, search for the glowing red panel to the left.

When you enter the next room there are three plasma turrets waiting for the Master Chief. The turrets are controlled by Grunts and there are Elites here too. Use the sniper rifle to take down the turret controllers and clear the room. Use the narrow halls around the room for cover. Now use the red arrow to reach the Security room to progress in the Cairo Station mission.

How to Find the Thunderstorm Skull: To find this skull you need to be playing Halo 2 on Legendary difficulty. After the armory, there is a big room where you need to crouch jump to reach a light fixture on the right wall. From there, jump onto the higher level where there are some beams, walk up one near to the end and crouch jump to reach the rails. Walk down the rails and jump onto the highest platform. Melee the trashcan, the skull is behind it.

As you enter the next doorway you will take fire from a plasma turret. Snipe the enemy operating the turret and go up the stairs behind him. At this point more enemies will come to the room, clear the area, and go down the halls where you meet the Marines. Clear the area and enter the hatch with the red arrow pointing to the Umbilicals.

More Elites will come to attack, use the shotgun to kill them, and jump out the door to reach the platform outside. Follow the red arrow pointing to shipping, and shoot the two flying Elites. Now you will reach the large elevator in the next hall but more enemies are here. Use the Battle Rifle or SMG to clear the room and step on the ledge ahead. The elevator below is coming with more enemies but they can be sniped inside the elevator before they reach Master Chief. Take down as many you can before they come, and jump onto the platform.

Now take the elevator down and snipe the three flying Elites you see. Keep moving across the metal structure and enter another elevator to reach the Firing Control. As you exit the elevator there are more enemies to face. Some Elites will be standing around a bomb in this area. Clear the room and a cutscene will trigger. This completes the Cairo Station mission of the Halo 2 Anniversary PC campaign in Halo the Master Chief Collection.