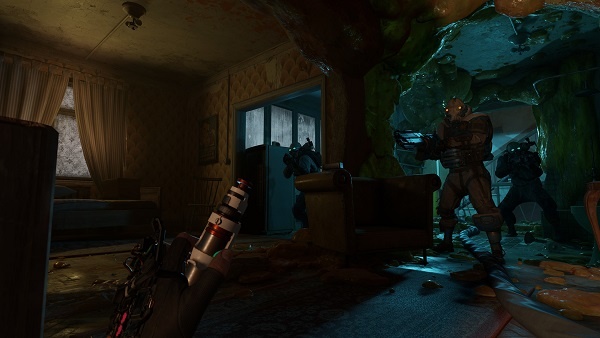 For the first time in the history of Half-Life, you will be able to upgrade weapons. Half-Life Alyx brings this feature and while there aren’t many options available, you will be still be equipped well enough to take on the Alien threats. In terms of weapons, there is a pistol, shotgun, and SMG for you to use. You can upgrade these weapons using a Combine Fabricator.

To upgrade your weapons you need to use the Combine Fabricator which is a piece of large machinery. You come across this machine a few times in Half-Life Alyx. You get to the Fabricator after solving a multitool puzzle.

The pistol is one of the first weapons you come across in the game. You can upgrade this weapon in Half-Life Alyx by adding different attachments that come at a cost.

If you are looking for something to kill the headcrabs then this is your weapon. However, the weapon requires precision and ammo shells are how to find. Its upgrades are extremely powerful but are pretty expensive.

SMG is a powerful weapon that uses utilizes power cells. There are around 30 rounds in the gun and is very easy to use.

That’s all you need to know about the weapon upgrades and their cost in Half-Life Alyx. If you need more help with the game check out the Half-Life Alyx Wiki.