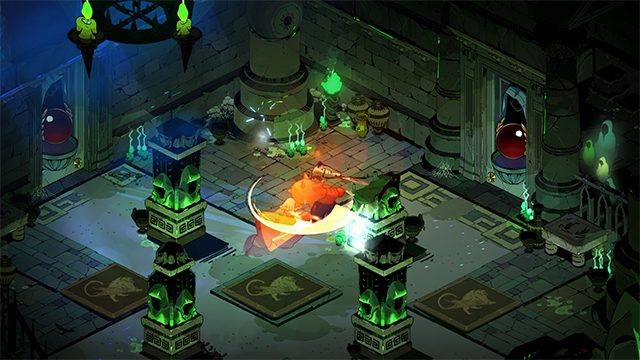 Weapons Upgrades and the Deadlus Hammer

As I mentioned above, upgrades for unlocked weapons require the Daedalus Hammer. Now the question is, how to get the Daedalus Hammer? You get this Hades artifact by clearing rooms and it might drop as a reward. It can appear in the first room run or you can also go and purchase the hammer for 200 Obols from Charon, the in-game vendor. You can find Charon at the Temple of Styx. During the run, you can only purchase two hammers but their effect will stack.

The effect of the hammer depends on the weapon being upgraded. Each weapon reacts and changes differently when upgraded. Some changes are minor but other upgrades may completely change the weapon’s playstyle in Hades. All weapon upgrades in Hades adjust, change, and improve weapon Attack or Special. It is to be noted that Zagreus’s cast remains unchanged.

There are 10 upgrades for Stygian Blade. Each new upgrades changes stats and how the weapon plays.

The Eternal Spear has 10 upgrades that help the weapon get stronger and better. It deals more DMG and gains new moves.

Shield of Chaos has 8 upgrades in Hades. Each upgrades as a little something to the mix and improves your trusty tool to perform better on the battlefield.

One of the Infernal Arms that can be unlocked with 8 Skeleton Keys once all other weapons are unlocked. It is a ranged weapon that deals a lot of DMG. There 10 upgrades for this Hades weapon, each more interesting than the last.

This is all we have for your in connection Hades weapon upgrades.