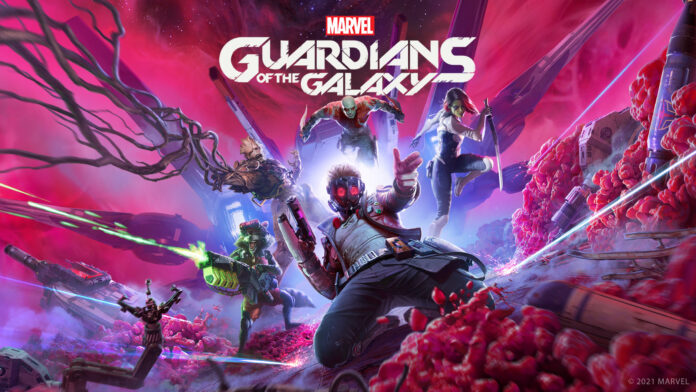 Guardians Of The Galaxy Crash, Stuttering, And Fixes

Marvel’s Guardians Of The Galaxy didn’t enjoy much fanfare in the follow-up to its launch. Partly, due to how Marvel’s Avengers turned out. However, developer Eidos Montreal has managed to turn things around as the game is enjoying great reception from critics and developers alike.

In terms of performance, Marvel’s Guardians Of The Galaxy also performs better on PC compared to Marvel’s Avengers at launch. Despite that, PC players are reporting errors and issues with Marvel’s Guardians Of The Galaxy like the crash at startup, No Suitable D3D12 driver found, Disk write error, controller not working, driver timeout, Missing Executable, blocky shadows, and more. The following are the errors and issues that PC players are experiencing with the game, along with their fixes and workarounds.

The game only runs on Windows 10 64-Bit and if you have another OS or 32-bit Win 10, then upgrade your operating system to be able to play Guardians Of The Galaxy.

Your anti-virus is another possibility why the game isn’t working. The anti-virus could’ve blocked the game’s exe by falsely detecting it as a virus. Either disable real-time protection or exclude the game’s install folder from it, I recommend the latter. After that, verify game files and from Steam and Guardians Of The Galaxy won’t crash at launch anymore.

According to PC players, they are unable to play Guardians Of The Galaxy due to the No Suitable D3D12 Driver Found error. The game only uses DX12 to run so if you are getting this error, then your GPU doesn’t support DX 12.

In case your GPU does support DirectX 12, then your GPU drivers are outdated and causing the No Suitable D3D12 Driver Found error. Update the GPU driver to the latest version to fix the error.

Guardians Of The Galaxy preload PC players are reporting gotg.exe is missing error. To fix this issue, restart Steam and check for any updates for the game. This will download the patch fixing the missing executable error.

Another reason behind the gotg.exe is missing error could be your anti-virus blocking the game’s exe. Disable the anti-virus or exclude the game’s folder from the anti-virus. After that, verify game files from Steam and the error will be fixed.

Some of you are having this issue with the game on Epic Games Launcher. You could try to add the game to Steam and make the changes stated above. However, this might not work. To add your non-Steam game to Steam, open Steam client > Games > Add a Non-Steam Game to my library. If the game isn’t in the list the pooped up, click on Browse and navigate to Guardians Of The Galaxy’s folder and add its executeable.

Some AMD GPU users are reporting that they are experiencing blocky shadows while playing Guardians Of The Galaxy. This can be fixed by installing Driver 21.10.2 or your GPU.

According to PC players, they are unable to install or update Guardians Of The Galaxy due to Disk Write Error, and here is how to fix it. One reason behind the error is the anti-virus or Window firewall blocking the game or Steam. Disable the anti-virus or allow the game and Steam through the firewall to fix the error.

In case Disk Write Error persists, open CMD and run it as administrator. Type the following commands and press enter after each command.

If the error is still isn’t fixed, close Steam and go to Steam’s install folder and navigate to Steam/logs/content_log. You are looking for a ‘failed to write’ file, Open the file and it has the path for the corrupt files causing the error. Follow these paths and delete the files. Open Steam, try again and Disk Write Error is now fixed in Guardians Of The Galaxy.

Your outdated GPU driver can also cause the game to crash. Update the GPU driver and make sure to do a clean installation to fix the issue.

In case the GPU isn’t overclocked, use MSI Afterburner to reduce the GPU clock by 100 MHz or lower the graphics settings. If you don’t want to mess with the GPU clock, players can cap the game’s max FPS to lower GPU and CPU load that will the Marvel’s Guardians Of The Galaxy in-game crash. Players can do that through the in-game FPS limiter.

However, some players have reported that the in-game FPS limiter doesn’t work. In that case, open Nvidia Control Panel > Manage 3D Settings > Program Settings > select Guardians Of The Galaxy. Enable the Max FPS Limit and set the value for the game’s max FPS. As a general rule, if your current target is unlocked FPS, cap the game to 60 FPS. In case 60 FPS is your current target, then cap the game to 30 FPS to fix the Guardians Of The Galaxy in-game crash.

Performance issues like low FPS and stuttering are common among PC games and Marvel’s Guardians Of The Galaxy is no exception. Players are reporting that the game is stuttering and facing Low FPS issues. Here is how to fix the stuttering and Low FPS issue. First, make sure you have installed the latest GPU driver and do a clean installation.

Nvidia GTX 900 (Maxwell series) GPU owners are specifically experiencing poor performance while playing Guardians Of The Galaxy. But there is a fix for it. Just install Nvidia Driver version 472.12 and do a clean installation. This will fix the Guardians Of The Galaxy’s low FPS issues on your GTX 900 series GPU.

Apply these settings and players should see a noticeable improvement in performance and stuttering will be fixed too.

That is all for our Marvel’s Guardians Of The Galaxy fixes for errors like AMD Driver Timeout, No Suitable D3D12 Driver Found, blocky shadows, Crash At Startup, missing exe, disk write error, in-game crash, and more. If you are facing errors and issues with other PC games or your PC then also see our hub for commonly occurring PC errors and their fixes.