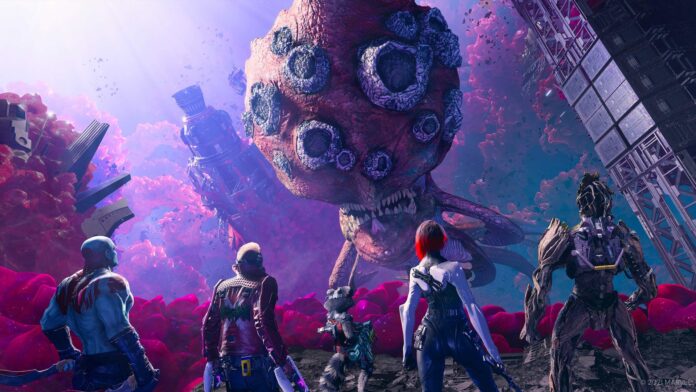 Guardians of the Galaxy Chapter 3 Choices and Consequences

Listen to Drax: Drax will tell a story about Fing Fang Foom and that it would be a glorious death by its hands. The team starts combining ideas to avoid dying.

Focus on Rocket: You listen to Rocket’s idea as he explains how people pay high prices for her collection. Gamora says that we won’t have time to sell it in time.

Rocket: If you sell Rocket Peter says that he is scary inside. You can use his mind to exract him but you owe Rocket.

Groot: If you decide to sell Groot, Peter appricates him coming forward and says that Groot is a more convincing monster. Peter will promise Groot to help him escape the transaction is done. Depending on your choices here you will see different cutscenes for Rocket or Groot as well as different missions for them later in the story.

Encourage: Rocket will be angry at you but you tell him he’ll get 10% increase in his share.

Stop Drax: Peter will drop down the ledge to destroy the goo and enter the cave. At the other side of the cave there is an obelisk for Drax to deal with.

If you stop Drax the last time this choice becomes available.

Stop Drax: Peter will find another way to by shooting the gunk nearby.

Stand Your Ground or Back Off

Stand Your Ground: Star Lord sticks to the plan and Groot goes into the cage.

Back Off: Groot backs out and Rocket is sold off which makes Gamora angry but Rocket is happy. Depending on what choice you made there are a few changes to future cut-scenes but no huge impact on the story.

None of the following choices matter.

Rationalize: She would need more convincing.

Compromise: Tell her you can still do some of that stuff but she won’t budge.

Reassure: Tell her it’s not a big deal and gives you the cash.

Argue: You explain that you’re not kid and walk alone all the time. She will give you the money.