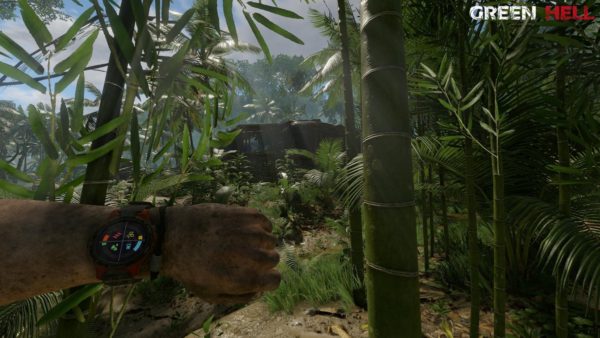 Surviving sometimes can be bothersome in many games but that is not the case with Green Hell. You will find exploring and surviving quite fun because of a lot of things to do. In this Green Hell Survival Tip guide will include all the tips and details on how to survive in the world of Green Hell.

As soon as the game starts your first focus should be to build an axe which will be very useful in this world. Finding a source of water can be tricky but do bear in mind that if you are having trouble finding water “DO NOT” drink unsanitary water as it can cause diseases. Try to find coconuts off trees because coconut water is drinkable. Don’t throw away the shells after because they can be used to collect water in rain.

Once you get out into the open your first task should be to make a place for you to settle. Mark the coordinates of your settlement on the map to find it easily whenever you are afar. Now let us discuss more general tips about the game. You may have seen the magnifying glass near your status bar this basically shows if you have any sort of disease or wounds.

Try to store food that has been rotten to pick out grubs out of them. You may stumble upon things that look dangerous aka poisonous so don’t eat or carry them. If you did and died don’t make the same mistake again. An important thing to look out in this world is not to go insane. To avoid that eat lots of food, get plenty of rest etc because if you don’t there is a chance that a monster will be summoned to kill you.

Avoid the Bees nest if you can but if you need that honey then instead of attacking it by a stick or something go back a distance and throw rocks at it to scare the bees away. Avoid the blue frogs if you can because they are poisonous. There are varieties in shelters too as you can say bigger is better. The smaller ones are easier to build than the bigger ones. In the bigger ones, you have a low chance of getting a disease while sleeping.

Try making a fire so that you can roast the meat. Hunt for fish and other animals then roast their meat so that it is good for you to eat. This also decreases chances of you going insane. Fighting giant predators like jaguars is dangerous as you can lose your life and if not then get meat out of them which doesn’t have enough nutrition. Try making a map so you don’t get lost.

Try to find or craft better armor because of the rarer the materials used in the armor the less the chances of you losing a lot of blood on attacks. Wash in rivers so that you don’t go too long as dirty thus leading in diseases. Be careful in caves because there is a chance that a scorpion is lurking there.

Now weapons there are a few weapon types in the game for example spear and bows. For spear keep in mind that spear is quicker to throw and deals quite a punch. Bows are not as quick as a spear but you can have a lot of arrows with you so the bow can be useful too.

This marks the end of our Green Hell Survival Tips Guide. If you are interested in knowing more about the game then be sure to check out our crafting guide.