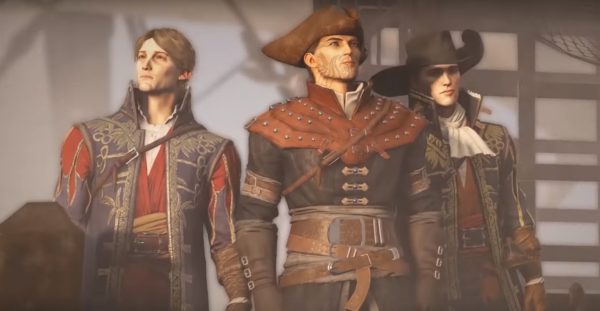 The world of GreedFall is massive but luckily you do not have to travel it on your own. You will find plenty of companions on your way. Each can assist you in the game. Every GreedFall Companion has a story and mission for you that you need to complete. In this GreedFall Companions guide, we are going to walk you through the different companions that you will encounter on your journey.

There are five companions in the game depending on your progression, they will guide you on your epic journey in Teer Fradee. There are some companions you can romance while others will remain “just friends.” To boost your bond with companions you can by completing companions quests and romance quests. Completing related quests will boost Friendship levels.

All GreedFall Companions, How to Unlock, and Romance Options

Kurt is a melee combat master and can wear heavy armors.

In GreedFall the first companion you’ll meet is Kurt. You unlock Kurt very early on in the game after creating your character. Kurt acts as your bodyguard in GreedFall who can equip multiple weapons. Depending on his weapon Kurt’s special attack will change which means he can have multiple special attacks. Your character shares a bond with Kurt, a bond you can level up by completing Kurt’s companion quests. Kurt has access to Endurance Potion as well which he can consume to recover his stamina and keep up his performance in battle. After you exit the Character Creation and meet Kurt, he will give you access to the Craftsmanship talent that you can use at the workstations.

How to Recruit Kurt: Exit character creation and play the opening section.

Kurt companion quests: Missing in Action, Among the Ghosts, Settling the Score.

Vasco is a duelist whose extraordinary agility compensates for his lack of protection; he also knows how to handle guns with great ease.

Vasco is another popular companion from GreedFall. He is a Naut of the seas who specializes in one-handed swords and guns. You meet him during “A Cure for Melichor” quest while you are spending time on Serene. Vasco’s Secret Blade Technique is a great combat ability that slashes at the enemy, does a decent amount of damage. Vasco can put on status effects on his weapons such as a poison coat for additional damage. This companion has an Intuition talent that is unlocked after raising the Friendship levels. The Intuition talent can help with tough conversations and allow you to influence characters.

Siora can use light blades and ranged elemental magic.

Among the best companions in GreedFall is Siora. She is available after you reach the Governors Palance of New Serene during “A Cure for Melichor” quest. Siora is the daughter of Queen Bládnid. She is a support class companion and a native to Teer Fradee. She wants to protect her people and see them prosper. Siora uses light blades and elemental magic in combat. Siora has three attributes – Agility, Willpower, Mental Power. Siora is highly skilled with one-handed blades. Just like Vasco, she can add coatings to her blades for additional damage. In her case, she can add the elemental coating. Since she is a support character she can use her special ability to restore the team’s health and armor.

Petrus is one of the companions in GreedFall. He is a missionary of Theleme who is charming with his words. Petrus specializes in both long and close-ranged combat. He can also use armor to protect himself from incoming attacks. You come across Petrus during the “Old Countries in a New World” quest. Petrus has access to divine magic rings for long-range combat. His special attack is Shadow Burt that allows him to fire a magic bolt at his enemies. This special attack has a chance to stagger the opponent which will give you an opportunity to attack to sneak in a few extra hits. Petrus gives you Charisma talent which helps in conversations and convince characters to do things they otherwise won’t.

The final companion on the list is Aphra. You come across Aphra during the “Scholars in the Expedition.” Aphra is a talented scientist in GreedFall and a member of Bridge Alliance. Aphra is a DPS companion in GreedFall who specializes in long-ranged combat. She is extremely effective from long-range but since she only uses rifles, it does leave her open to melee attacks. While you have her in your party, make sure you protect her from melee attackers. Now, going back to long-range, Aphra can throw elemental bombs that do significant damage in an AoE.

These were all of the companions you can recruit in GreedFall. If you need more help with the game check out the GreedFall Wiki.