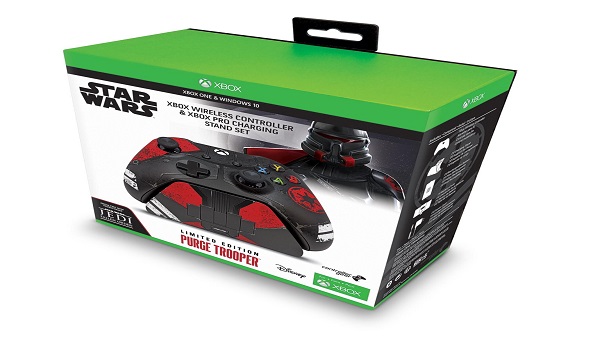 They are calling it The Purge Trooper Limited Edition Xbox One controller. It is available to pre-order right now from various retailers.

You can perform a quick Google search to find out where the controller is available near you.

The new Jedi Fallen Order Xbox Controller features a black design with some red and white patterns, mimicking the armor of the Purge Trooper.

In addition to the Star Wars controller, you can also pick up the Star Wars Jedi Fallen Order Xbox One X bundle. However, the Xbox One X Star Wars bundle doesn’t include The Purge Trooper Limited Edition Controller.

The bundle is pretty standard as it doesn’t come with anything custom. For $500 buyers will get an Xbox One X TB console, Star Wars Jedi Fallen Order Deluxe Edition, one month of Xbox Live Gold, Xbox Game Pass, and EA Access.

Star Wars: Jedi Fallen Order is scheduled to release on November 15 for PS4, Xbox One, and PC. The game is available to pre-order from EA Origin for PC, PlayStation Store, Xbox Live Marketplace.

EA recently released a brand new trailer for the Jedi Fallen Order which focused on the main villain. The trailer also showed the Jedi Temple, Purge Troopers, and hinted at an appearance from Darth Vader.