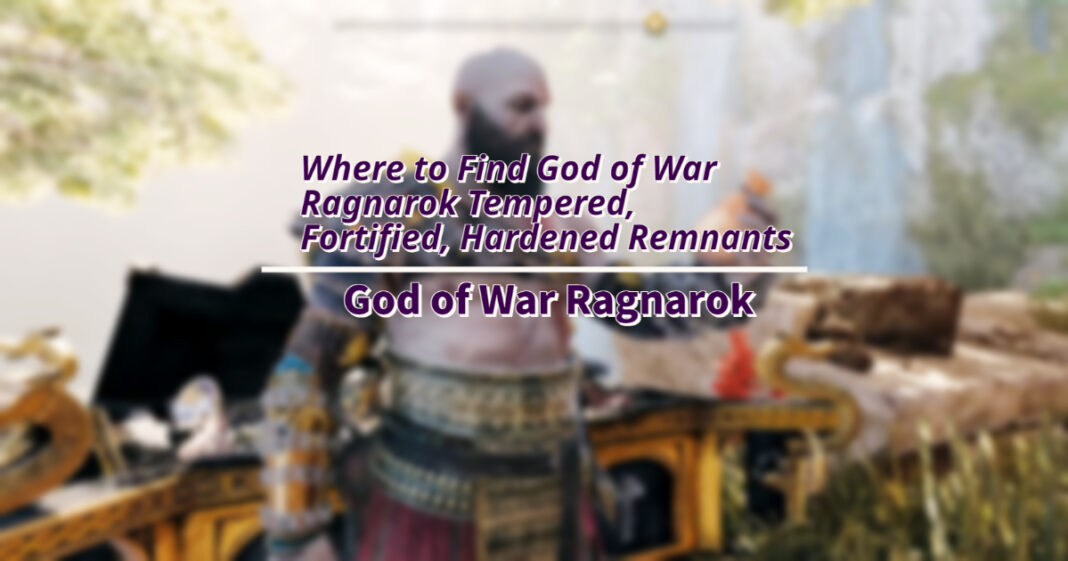 Where to Find Tempered, Fortified, and Hardened Remnants in GoW Ragnarok

Below, we’ve provided all the different locations from where you can get Hardened Remnants in God of War: Ragnarok:

The first Tempered Remnant in God of War Ragnarok is near Freya’s camp. The camp is north of the Mystic Gateway. Refer to the image above for the exact location, and when you reach the area, you can crack open the chest containing a piece of Hardened Remnant. A couple of enemies will spawn after you open the chest.

Head over to the Eastern end of the Barri Wood, and follow the path led by the wooden planks. Once you’ve done that, you’ll reach the Einherjar camp. Defeat the enemies there and loot the red chest near the tent. The chest in this area contains Tempered Remnants, Hack Silver, and Luminous Alloy.

Travel to the Temple of Light located southwest of the Mystic Gateway. Once you have reached the Temple of Light, you can loot a red chest. There are enemies in the area you must beat; this location’s chest contains Fortified Remnants.

Reach the cliffside near Midgard, and walk towards the well of Urd. Fight the enemies present there and loot the red chest to get your hands on some Tempered Remnants.

The Lake of Nine is easily visible on the map; all you’ll have to do is find Tyr’s Temple. Enter the Temple via an elevator and defeat the enemies present there to loot the red chest to get both Hardened and Tempered Remnants.

Looting the chest at this wreckage site requires using your spear and Leviathan Axe. Once you get closer to the wreckage site, you’ll see the red chest containing some Hardened Remnants.

Head over to the north-end region of Svartalfheim and look for an isolated island where you’ll find the red chest that contains some Hardened Remnants.

Find your way towards the entrance of Alberich Hollow near Svartalfheim and climb on top of it to find the red chest with some Hardened Remnants inside.

Head over to the entrance of Surtr’s and follow back your steps to the Mystic Gates. Once you reach there, you’ll encounter several enemies, and when you’ve defeated them, you’ll be able to loot the red chest and obtain some Fortified and Hardened Remnants.

How to Use Tempered, Fortified, Hardened Remnants

Due to their scarcity, obtaining Hardened Remnants in God of War: Ragnarok can be difficult. However, if you follow this guide and look for wreckage sites, loot red chests, and defeat Einherjar and Asgardian warriors, you will easily obtain this valuable resource. That’s all we have for now, but if you want to read more about God of War Ragnarok, here are some guides you might like: