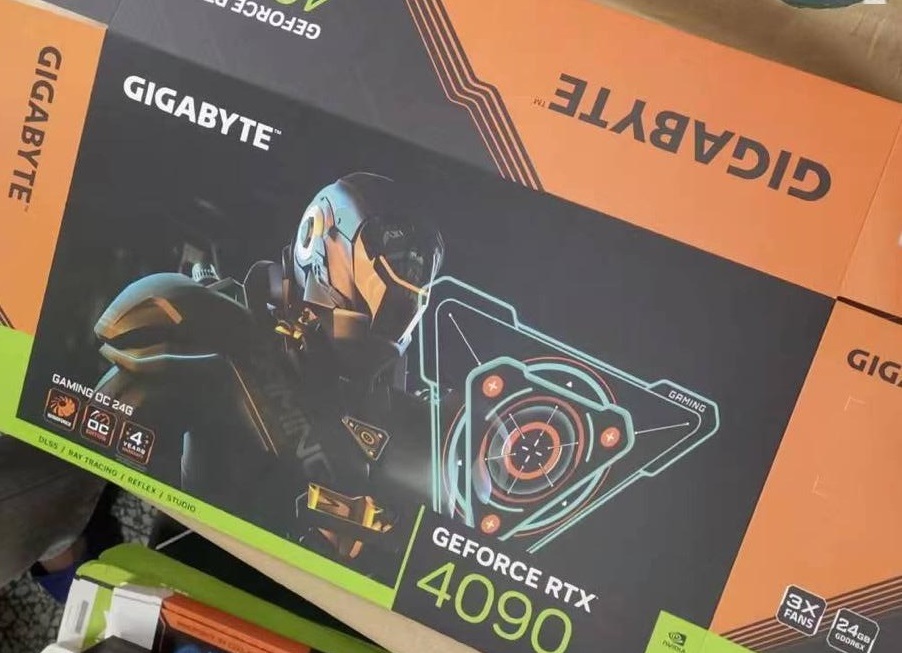 The next generation of Nvidia RTX 40 series graphics cards is supposed to launch soon and we are starting to get related to them. Here we have the leaked box of the upcoming Gigabyte RTX 4090 Gaming OC

While the images are not all that clear, we can see that this is a triple fan graphics card and is very similar to the previous RTX 3090 Ti Gaming OC from Gigabyte. So you can expect to see a similar cooler. The marketing material on the box confirms that the graphics card is going to feature 24GB of VRAM which should be great news for future-proofing for those interested in getting this graphics card for 4K or even 8K gaming.

The Gigabyte RTX 4090 Gaming OC will come with a 4-year warranty. Other images show that the center fan spins in the opposite direction compared to the ones on the sides. This should help increase airflow and improve heat dissipation. This seems like a very beefy card and seeing how chunky the RTX 30 series cards were, I am not surprised.

The marketing confirms that the card comes with vapor chamber cooling, which is not surprising. It also has a backplate with cutouts for better heat dissipation. All this is expected from the premium graphics card which the Gigabyte RTX 4090 Gaming OC is. As this is an OC variant, it should come with a factory overclock out of the box.

You should take these images with a grain of salt as we have no means of verifying whether or not these are even real or actual packaging for the upcoming RTX 4090. We have included an image of the Gigabyte RTX 3090 Ti Gaming OC to give you an idea of what this upcoming RTX 4090 graphics card is going to look like.

Let us know what you think about this RTX 4090 leak and whether or not you are interested in upgrading to the 40 series of graphics card. We do not know anything about pricing right now, so stay tuned for more information.