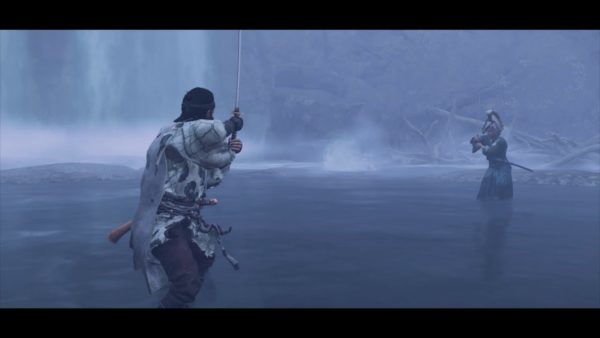 The Six Blades of Kojiro

First talk to the Yamato located to the west of Umugi Cove, past the tavern in Toyotama region. The musical will explain what the mythic quest is all about. The objective of the quest is to find and defeat Kojiro. But first, players need to find and defeat his five students.

By this point in the game, there is a chance that players might have faced some of the Straw Hat Ronins. Players can challenge random Straw Hat NPCs across Toyotama to battle. The following are the locations for each of Kojiro’s students.

Yasumasa
This Straw Hat Ronin can be found northwest of the Drowned Man’s Shore and South of Old Kanazawa Marsh. The ronin will be at the point where the lake meets the river.

Tomotsugu
This ronin is to the north of Urashima’s Village. Follow the shrine path above the village to its furthest point. Tomotsugu will be down at the beach fishing.

Kiyochika
Follow the river from Kishibe Village towards the southwest. Kiyochika will be under the waterfall.

Hirotsune
Hirotsune is at the On a risen plateau north of the Field of the Equinox Flower.

Kanatomo
In Toyotama’s North-East coastline, go to East of Yamabushi’s Peak. There is a small land with a path leading to it. Kanatomo is there.

Once players have defeated all five of his students, it’s time to find Kojiro. He is located at Omi Monastery to the West side of Mount Omi. The marker will take players to a crack in the wall. Go through the crash and Kojiro will be waiting on the side.

How To Beat Kojiro

Kojiro is a test of player’s skills. This opponent doesn’t let up as believes in a strong offense using heavy strikes and lunges. Here is how to defeat Kojiro.

Players need to stick with the Stone Stance. Kojiro has a lot of health and is very good at blocking and dodging player’s attacks. So players will have to chip away his health one strike at a time.

Being defensive is the best strategy against this opponent. Use counterattacks and dodges to land single hits and chip way his health.

Also, unless players have fully upgraded the Stone Stance techniques, Kojiro won’t be staggered. So don’t go trying to break his defense as he is most likely to dodge your attacks.

If players manage to parry his attacks successfully then follow it up with the Heavenly Strike attack if players have unlocked it. This will not only cut his defense but will also deal significant damage.

Stick with these tips and eventually, players will defeat Kojiro. Once he is defeated, players with get the Kensei Armor along with the Kensei Headband.

That is all for our Ghost of Tsushima The Six Blades of Kojiro Guide with tips on how to get the Kensei Armor and how to beat Kojiro. For more on the game, also see our Hidden Altars Locations Guide and Black and White Dye Merchant Locations Guide.