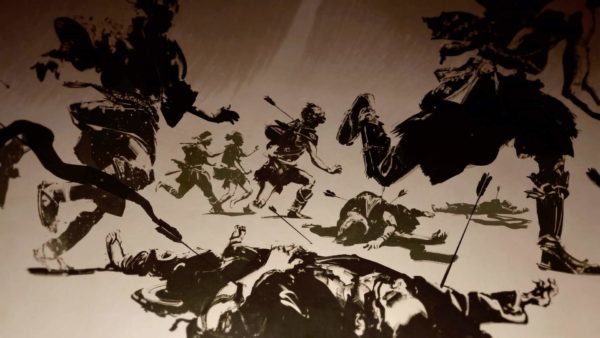 To trigger this quest, players first need to talk to the Yamato, located in North Tutsu in the small clearing to the south of the Rustling Bend river in the Izuhara region. Talk to the Yamato and he’ll explain that quest is about finding the legendary Armor of Tadayori.

Players need to go to the southern section of the area marked on the map. Players find a small mountain with a path of violet chrysanthemums. Follow the path to the top, there will be a shrine. Examine it and the lamp to get your next location which is Tadayori’s Rest.

This time the area marked on the map is much bigger. Players need to go north towards Houren’s Pastur and cross the river where they’ll find more chrysanthemums. Follow them to the mountain and look for a lantern at the base of the cliff.

There is a small gap next to the lantern, crawl through the opening. On the other side, there will be dead Mongols and a cemetery. Examine the grave and the incense. Now players have to defeat the Kaede in a duel.

How To Defeat Kaede

Kaede is a tough opponent as she is fast and unleashes rapid combo attacks. Blocking her attacks is the main strategy is this fight and here is how to beat Kaede.

If Kaede sheaths her sword and walks towards you then she is preparing for an unblockable attack. Either jump or use dodge to avoid the attack. However, she won’t always use these rapid combos or unblockable attacks as she’ll occasionally use a single sword swing attack. These attacks are easily parried which will open Kaede to counterattacks.

Don’t get carried away if you get an opportunity to hit her. Make sure you don’t hit her more than 3 times. Stick with these strategies and eventually, players will defeat Kaede.

Once she is defeated, she’ll direct Jin towards Tadayori watches over Azamo Bay for eternity. Head there and don’t go inside the town instead, go to the west side of the town and club the cliffs. At the top Mongols will be waiting for Jin. Here players need to rescue Yamato the musician.

Stealth is recommended here as Mongols will send one towards the Yamato if Jin is discovered. There will be a skull and crossbones icon on the Mongol’s head who is going to kill the Yamato. Kill that Mongol immediately.

Once the location is clear and Yamato is safe he’ll reveal that he mislead most of the soldiers and the armor is buried under the statue just behind him. Interact with the statue and the Armor of Tadayori is yours.

That is all for our Ghost of Tsushima The Legend of Tadayori Mythic Quest Guide with tips on how to defeat Kaede and how to get the Armor of Tadayori. For more on the game, also see our Gifts Guide and Stances Guide.